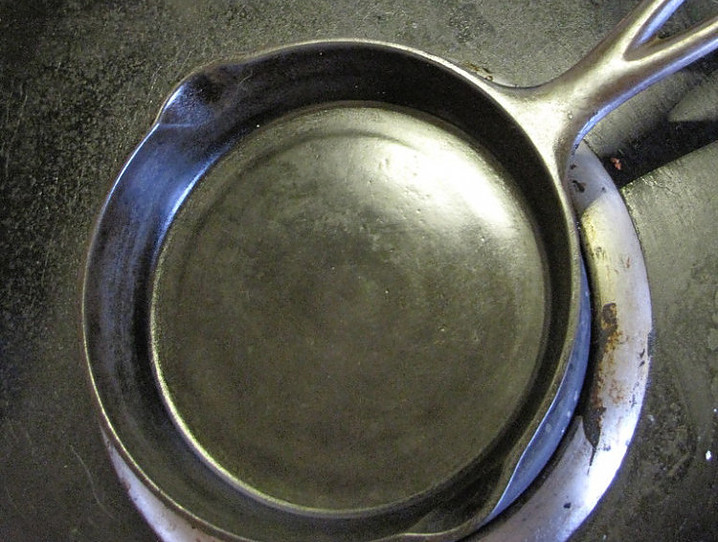 Have you heard the phrase “Cast iron lasts forever” or even said it yourself?

I know I have.

So, is it true? Can cast iron really last forever?

Or is it merely an expression to attest to its durability?

Technically, cast iron can only last as long as someone is willing to take care of it. Left on its own, cast iron will rust. Eventually, the rust will eat away at the iron surface and make holes in it. And at that point, it will be impossible to repair and of no good. So, when you say cast iron can last forever, it’s true, as long as someone uses and cares for it. Or, at least, is keeping an eye on it and making sure the rust doesn’t get out of hand. That’s why there is so much information on restoring cast iron.

Does Cast Iron Get Better With Age?

Cast iron can get better with age, and that’s the beauty of cast iron. When you use it regularly and take care of it, it will get better.

You can build up the layers by seasoning your pan in the oven, but the best way is to cook in it often. The more you cook in your pan, the more layers of seasoning you will get.

However, acidic foods will take away from the seasoning, so it’s a give and take.

Seasoning is oil baked into the iron. The goal is to get layers of it, so your food never has contact with the iron, nor is the iron exposed to the air and water.

Exposure to air and water is why cast iron rusts.

This baked-on oil is called polymerization and looks a bit like plastic.

The more layers you build up, the smoother and more nonstick the pan becomes.

As you can see, this means that cast iron does indeed get better with age.

Can Cast Iron Wear Out?

Yes, cast iron can “wear out,” but it can also be restored in most cases.

That isn’t true of all cookware. When other types (especially cookware that comes with a nonstick coating) wear out, you must throw it away.

When a pan no longer functions the way it’s supposed to and can’t be restored, it has little use.

But that isn’t true for cast iron.

Even when you come across a pan covered in rust, it’s generally just on the surface.

However, you probably wouldn’t cook in a pan in that condition so it might seem like it’s no longer any good. But that’s where you would be wrong.

People often buy rusted cast iron at flea markets and garage sales because it’s inexpensive, and they know it can be restored and even look new again.

Rust isn’t the real problem. Warping, pitting, chipping, or cracking is of more concern and could mean the end of a pan.

Lodge is Forever – How to Restore Cast Iron

Cast Iron is brittle, so it can break. But this doesn’t happen very often.

I’ve read a few stories of someone heating their pan on the stove, and suddenly, they hear a loud noise. When they look, they see their pan broken into two pieces.

There are many guesses as to why it happens. Still, it all boils down to cast iron being brittle and not responding well to being heated too quickly or for too long a period, especially when empty.

That is one of the reasons you will always hear you should heat your pan slowly.

Another way cast iron can be destroyed is through improper shipping. If it’s not thoroughly wrapped and placed in the package so it can’t move around, it might break, crack, or chip.

It’s not a bad idea to know how to ship it. You can learn how at Guide to Shipping.

What else destroys cast iron?

Pitting, cracking, chipping, and warping can go either way.

Pitting can happen from improper use, but it’s mainly from corrosion. Sometimes pitting can be filled in with seasoning, but sometimes it’s not worth it.

Cracking is usually hairline and will be filled in with seasoning. However, a crack that leaks is much harder to fix, and most people won’t think it’s worthwhile.

Chipping is primarily cosmetic, but again, if it’s is big enough and affects your cooking, you will probably stop using it.

Warping can be minor or super annoying. But rarely does it mean you can’t use the pan at all.

So, can cast iron last forever?

But that doesn’t mean it will.

As you can see, cast iron needs the human touch.

A pan left on its own will succumb to rust. And rust left unchecked will destroy cast iron.

But a person who treats their cast iron well, cooking and building up layers of seasoning, will be able to pass their pans on better than when they were new.

However, people can also, through neglect or carelessness, let their pans get rusty.

Or leave them with crud on them.

Even though rust and crud are unsightly, it usually is not detrimental.

As long as the rust is only on the surface, it can be restored. And any crud can be scraped or sanded.

Other things, such as pitting, cracking, chipping, or warping, may or may not be able to get fixed.

It all depends on the extent of the damage.

Overall, cast iron can and does last. It is passed down from generation to generation, leaving a legacy.

What will you do with your cast iron?