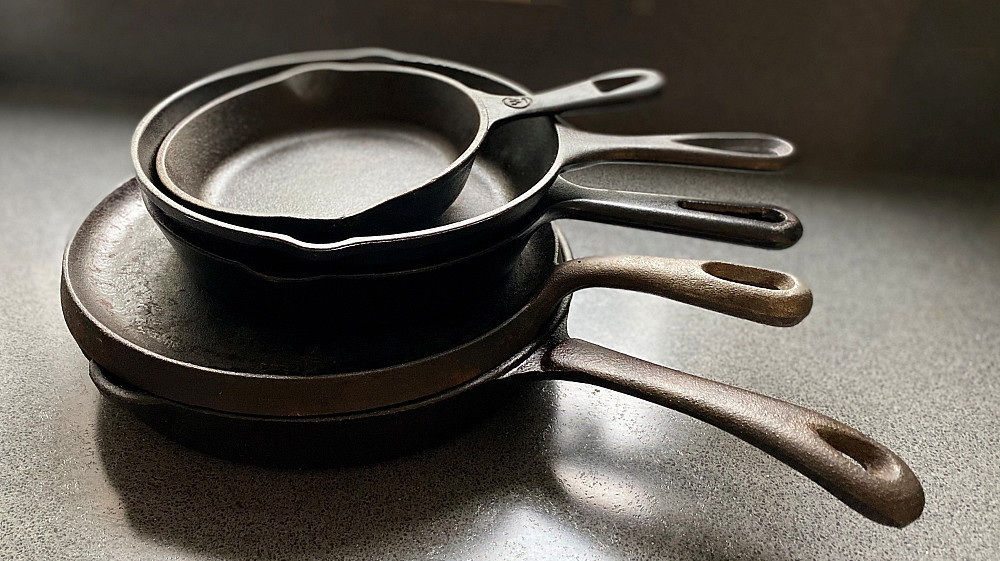 Have you heard that cast iron is indestructible? That it will last forever?

Usually, I read and have probably said that it’s virtually indestructible.

But what does virtually indestructible mean?

Consequently, if cast iron is almost indestructible, it can be destroyed, even if unlikely.

So, what are these things that can cause your cast iron to be damaged beyond repair?

Cast Iron is durable but brittle. Like glass, it’s hard but breakable. Therefore, it isn’t indestructible. Cast iron can crack, chip, or break with physical impact. Or it can warp when it isn’t heated or cooled properly. Pitting most often happens when rust is left on the pan over a long period. On the other hand, cracks, chips, warpage, or pitting don’t necessarily mean the pan is ruined. But if it breaks, there is little hope for it.

A chip may affect how the pan looks, but it typically won’t destroy it.

It’s easy to see and generally happens along the lip of the pan.

And sometimes, what looks like a small chip is really just a void in the casting process.

But even if it is a small chip, it won’t matter unless you are a collector.

However, a larger chip can be problematic, depending on where and how big it is.

A chip may start out as a crack or result from physical impact.

2. Cracks Are Usually Hard to See

You won’t even know you have a crack most of the time because you won’t see it.

The most common type is a hairline crack due to heat, and they look like scratches.

Fortunately, these cracks will get filled in with seasoning as you continue to cook, so they are not a problem.

However, what starts out as a hairline crack can get bigger if you always heat your pan too quickly.

A few other ways to get a crack are physically dropping the pan, thermal shock (sudden temperature change) or fatigue, or it came that way.

I’ve heard of people trying to fix their broken cast iron skillet, but it’s generally expensive and with no guarantees of success.

In fact, I read about one person who bought two vintage cast iron skillets, and they arrived broken. This person was obviously upset and insulted when the seller refused to take responsibility for improper shipping and claimed that cast iron was indestructible instead. Yet the proof was in the pictures of the two broken skillets.

So, you must have a good grip on your skillet when moving it around and know how to properly ship cast iron. This guide to shipping will show you how.

Warping can be very obvious if you have a spinner or less apparent if it’s slightly wobbly.

I have a slightly warped skillet, but it doesn’t cause any real problems since I have a gas stove.

On the other hand, a spinner can be very frustrating, to say the least.

Unfortunately, people who try to fix a warped skillet are usually unsuccessful.

How to test for a Warped Cast Iron Skillet

5. Pitted Cast Iron May Be Salvageable

Pitting can be a problem if it’s from rust and corrosion. When rust is left unchecked for too long, the pan begins to erode, and the lost iron cannot be replaced.

However, you may be able to fill the pitting in with seasoning if it isn’t too bad.

For example, if you left your empty pan on the burner for too long like I did. It ruined the seasoning and left tiny pockmarks on the surface. But the pan itself wasn’t ruined.

I still use the skillet almost every day, and the pockmarks are getting filled in ever so slowly.

The best two ways to keep a pan from pitting are immediately dealing with any rust and not letting your empty pan sit on the burner drying for too long.

Most people think and will talk about rust being your biggest problem.

But that’s only because rust can quickly appear if you don’t follow a few rules. Rules such as:

All these rules have to do with water. You may have heard that water is the enemy of cast iron.

Though really, it’s water plus air for more than a few minutes.

My friend had some problems with rust because she didn’t realize you couldn’t let the pan dry on its own.

However, the rust on her pan was only surface rust and could easily be wiped off and dried. Or seasoned.

Seasoning creates the barrier between the iron and the air.

Because cast iron has a high carbon content, it is susceptible to rusting.

But a little rust is no reason to throw the pan away.

Unfortunately, I’ve heard of people doing just that because they saw some rust on their skillet.

As you can see, cast iron is not indestructible.

However, I hope you haven’t gotten the idea that it’s easily destroyed. Because it isn’t.

I still stand by the statement that cast iron is virtually indestructible.

Cast iron, in general, will last a lifetime if taken care of properly. And will hold up even when other types of cookware wouldn’t.

But it also doesn’t mean that you can disregard the rules.

So, if you put your cast iron in the dishwasher, you will ruin the seasoning and probably get rust. But your pan won’t be destroyed.

And if you always heat your cast iron quickly on high heat, your pan is likely to warp. But even then, a warped pan is often still usable.

Or if you see a scratch and suspect it’s a crack, just keep cooking in it and let the seasoning fill in the space.

If you drop your pan, though, and it breaks in two…well, then you can throw it away.

What is your experience with cast iron?

Have you ever had to throw a pan away? What happened?