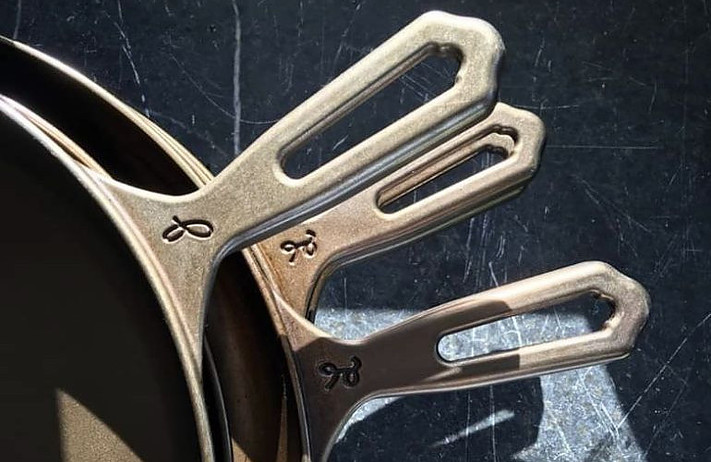 Have you ever wondered what makes Lodge Cast Iron so popular besides the price point?

And should you maybe be considering other more expensive brands such as Butter Pat?

What does each brand offer?

I decided to take a closer look at Butter Pat, one of the more expensive brands, and compare it with Lodge, a definite favorite in the cast iron world.

Let’s see what I found.

Butter Pat and Lodge are two American cast iron companies. Lodge started in 1896 and Butter Pat in 2016. The price difference may be what’s most noticeable, as well as the way the skillet looks right out of the box. Lodge moved with the times to keep their pans affordable, whereas Butter Pat brought back the lost art of how Cast iron was made in the late 1800s (when Lodge first began). So, that means Butter Pat will cost more, but you will also get all that made cast iron special in the past.

Tell Me About Butter Pat

Dennis Powel, the founder of Butter Pat, broke his grandmother’s skillet in 2013. He tried to repair it but was unsuccessful, so he decided to make his own.

His pans would be cast thinner and smooth like they used to make.

However, it was not as easy as he hoped it would be. It took three years of trial and error before he and his team came up with the design, casting technology, and iron formula they were happy with.

The pans they make today are a result of their ingenuity and perseverance.

I don’t own any Butter Pat but here is a review from someone who does have one.

I will not go into as much detail with Lodge because you’d be reading this for a week. Lodge is a huge company.

It is a family-owned business located in South Pittsburg, Tennessee.

Joseph Lodge began Blacklock Foundry in 1896, but after it burned, he rebuilt and named the new foundry Lodge Cast Iron.

Over the years, Lodge has survived several economic downturns and even thrived when other foundries were closing down.

And as business continued to grow, another foundry was built. The new foundry enabled Lodge to increase its manufacturing production by seventy-five percent.

Lodge is the only company that began in the 1800s and is still in business today.

And as far as cast iron goes, Lodge offers a large variety, including classic, enamel, chef, and Blacklock.

Plus their carbon steel cookware and many accessories.

Let me note that this comparison is for Lodge’s seasoned cast iron cookware, which is what they sell the most. However, they do have some more expensive cast iron cookware as well (though nothing as high-priced as Butter Pat).

About Their Cast Iron Cookware

There are several similarities between these two brands:

However, there are even more differences:

A Test Comparison of Both Pans

As you can see, Butter Pat and Lodge both make cast iron cookware, but with quite a few differences.

The price is probably the most significant factor in which brand a person will buy.

However, if you are particularly interested in having a new pan made like a vintage pan, you might be willing to pay the extra money for a Butter Pat.

Butter Pat casts each pan by hand, so it weighs less and has a smooth polished surface.

Lodge automates their cast iron because production is so high. However, their pans are heavier with a textured surface.

Both Lodge and Butter Pat make quality cast iron cookware that will last for generations if maintained.

If you like some things about the Butter Pat pan but are unwilling to pay that much, you might want to consider Lodge Blacklock. It also weighs less and is cast somewhat smoother. However, it also costs more, but not as much as Butter Pat’s pans.