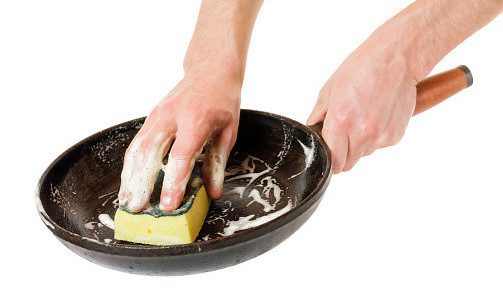 If you have never used soap on your cast iron pans but keep hearing it’s okay, you may be asking yourself, “Should I start using soap on my cast iron pans?”

On the one hand, you’ve done just fine without it; on the other hand, you are open to new ideas and at least hearing the arguments for using soap.

However, you may be a bit skeptical, thinking, “What’s the deal with soap anyway?”

Cast iron lovers have firm opinions on the use of soap, so this should be interesting.

Should I Start Using Soap on My Cast Iron Pans?

If you are sincerely asking if you should start using soap on your cast iron pans, it will require you to accept that soap will not hurt your carefully built-up seasoning. Lodge Cast Iron, the most reputable manufacturer of cast iron cookware in the United States, says using a little soap is okay. In their own words, “Contrary to popular belief, you can use a small amount of soap to clean cast iron cookware! Large amounts of soap can strip the seasoning off your pan, but you can easily re-season your pan as needed.”

Let’s Start By Talking About Soap

I have used soap from the beginning and haven’t seen any negative effects. So from experience, I can’t really relate to anyone who says soap is harmful.

That being said, as I researched and wrote about cast iron, my mind was changed somewhat about its necessity.

I began from the logic that soap was necessary to get the pan clean; sanitized. I didn’t understand why anyone would think differently.

However, I have learned a few things about soap that were eye-opening. Such as:

You can read more about this at Google Answers: Why do we wash dishes with soap? (it’s long but informative)

Making a Case For Using Soap (or Detergent)

Now that you know a little more about soap and detergent, I will do my best to make a case for using detergent (not soap).

Detergent is a common way people clean their dishes. It’s effective as a cleaning product.

Although detergent makes it easier to wash away oil and dirt, it will not damage the seasoning.

That’s because the seasoning is oil that has polymerized or bonded with the iron.

When someone wants to remove the seasoning from their pan, they use lye, sandpaper, or oven cleaner.

No one uses detergent.

In addition, when you have a reputable manufacturer such as Lodge Cast Iron telling you it’s okay, then it must be, right?

And on top of that, many authority sites state that it’s a myth to say you can’t use soap, and by soap, they mean detergent.

When I look at forums, most people say they use “soap” all the time or occasionally, and most will agree it’s not necessary.

And almost everyone points out that you shouldn’t put your pan in the dishwasher or let it soak, and you should always dry your pan completely after washing.

Is It Bad to Wash My Cast Iron Pan With Soap?

Making a Case For Not Using Soap (or Detergent)

There are two main reasons someone might say you shouldn’t wash your cast iron pan with soap.

The first reason is that soap ruins your seasoning.

Again, when someone says “soap,” they usually mean detergent or dishwashing liquid.

And this is a myth.

However,  true soap is a natural product that contains lye and really would affect the seasoning.

But detergent is synthetic, and synthetic detergents are non-soap washing and cleaning products.

So, unless a person is talking about soap, the natural product, it’s hard to make a case for not using detergent by saying it will ruin your seasoning.

The second reason is there are better ways to clean cast iron.

As you can see, there are several ways to clean your cast iron pans without using soap.

Cleaning Your Cast Iron skillet? Don’t Use Soap and Water

If you have been thinking, “Should I start using soap on my cast iron pans?” hopefully, reading this has helped you decide.

There are many ways to clean cast iron pans. And sometimes, one way works better than another, depending on the condition your pan is in after cooking.

But, does that mean soap (or detergent) can’t be one of the ways?

On the other hand, as with many things involving cast iron, it is a matter of preference and opinion.

When I started using cast iron, I always used soap because Lodge said it was okay.

However, as I did more research, I concluded that I didn’t always need to use it.

And if you read more from Lodge’s website, you realize they also say soap isn’t necessary all the time.

But they are quick to let you know it’s okay.

How do you clean your cast iron pans?

Do you ever use soap?

Be sure to let me know in the comment section below.