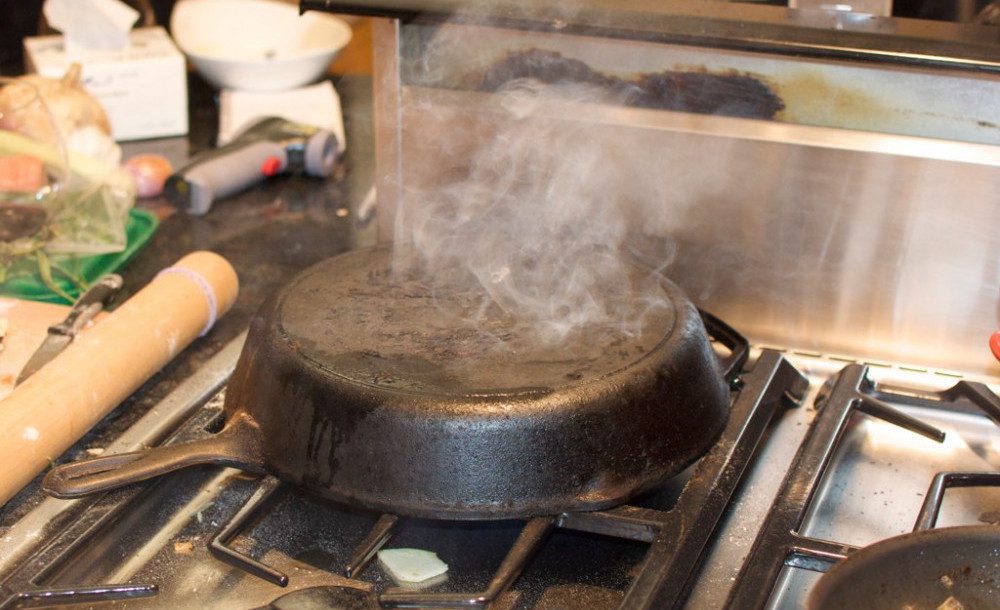 “What if I can’t stand the burning smell of my cast iron skillet when I season it in the oven?” might be a question you would like answered.

I know well the odor you are talking about, and it isn’t pleasant.

Some people are more affected by it than others, though.

So, if you are one of the many who struggle with the burning smell coming from your oven, have no fear.

There are alternative ways of seasoning that don’t require you to use your oven.

Here are a few of those ways to consider.

What If I Can’t Stand the Burning Smell of My Cast Iron Skillet?

If you can’t stand the smell of oil burning in your oven, try seasoning your skillet on the stovetop. It may take a bit more effort because a burner won’t season your pan as evenly. But there is a better chance the smell won’t bother you because it takes less time. Another way to consider is seasoning your skillet on the grill. The grill can be gas or charcoal. And if all else fails, you could season your pan in the oven and open a window.

1. Season Your Pan as You Use It

Lodge says the best way to season your pan is to use it regularly.

Of course, they also recommend seasoning in the oven, but it is clearly secondary.

And a chef posting on Quora gives these steps for seasoning on the stovetop through regular use:

This is a little off track, but I should point out that you don’t need soap to clean the pan. Soap will remove the oil you don’t want to be removed. The heat, and not soap, kills any bacteria still in the pan.

It should also be noted that a few minutes on the burner will not polymerize or chemically bond the oil to the iron. So this is more of a building process than a one-time oven seasoning.

But if you consistently use your pan and follow these steps, you won’t have to use your oven. It may take a bit longer to build the seasoning up, but with time, polymerization still happens.

On the other hand, if your pan is in poor condition, to begin with, this method may not work.

How to Season Cast Iron on Your Gas Grill

2. Season It On the Grill

This method will be the closest to oven seasoning without using your oven.

You won’t have to worry about the smoking, and the smell will be less of an issue since you are outside.

Everything else will be the same as if you were seasoning your skillet in the oven.

On a gas grill:

On a charcoal grill:

On a grill burner (or stovetop):

All three methods are similar but slightly different. It will be challenging to season the outside of the pan on the stovetop.

But you won’t need to use your oven or smell the burning odor.

On a nice day, opening a window might help.

I’ve read about many people who do this. Some even disconnect their smoke alarms.

By opening a window, the smoke won’t be as bad. And hopefully, the smell.

This way won’t entirely eliminate the burning smell, but your exposure will be minimized.

If you can go outside or to another part of the house, that might help too.

All in all, though, you might want to try using a grill first if you have one.

And unless you are dead set on oven seasoning, the stovetop might be your other best option.

I’m not convinced opening the window will change the burning smell enough to make it tolerable.

On the other hand, it’s your decision.

Season Cast Iron Without an Oven

So, if you are asking, “What if I can’t stand the burning smell of my cast iron skillet?” hopefully, these alternative ways are the answer you are looking for.

Whether you season your pan on the stovetop by regularly using it, or you try using your grill, you can get the polymerized surface.

The oven isn’t the only way.

However, it is the most convenient and will do the whole pan evenly.

Therefore, if you decide to stay with the oven, try seasoning on a nice day when you can open a window.

Which way will you try?

2 thoughts on “What If I Can’t Stand the Burning Smell of My Cast Iron Skillet? – 3 Alternative Ways to Season”