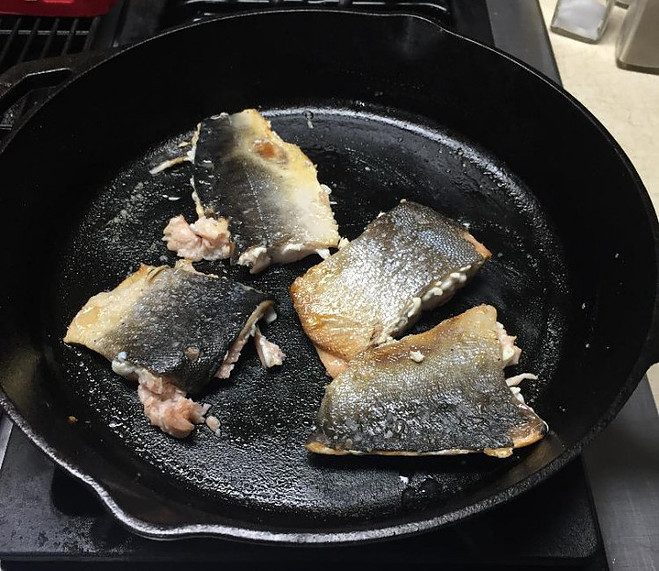 Are you wanting to know, “How do I keep salmon skin from sticking to my cast iron skillet?”

You just want a crispy crust, but instead, the fish gets stuck and becomes a mess.

I know because it has happened to me.

So, what is the best way to keep it from sticking?

How Do I Keep Salmon Skin From Sticking to My Cast Iron Skillet?

The best way to keep salmon skin from sticking is to cook it in a hot skillet with enough oil. The combination of heat and oil will also give the skin a crispy crust. Other factors include setting the salmon out, so it’s not so cold and making sure as much of the moisture as possible is out of the fish before adding it to the pan. Also, salt it right before cooking.

The main reason why most any food, including salmon, stick to a cast iron skillet is that the pan and the oil aren’t hot enough.

It’s also possible your pan needs to be reseasoned in the oven.

But for the most part, as long as you make the salmon in a hot skillet and use enough oil or fat, you should not have a problem with sticking.

To give it a try, simply follow these six steps:

1. Set Out Your Salmon Beforehand

The first thing you will want to do is set your salmon out for 15 or so minutes before cooking to take some of the chill off of it. This is perfectly safe.

According to the FDA concerning fish, “bacterial pathogens can enter a phase of rapid growth when temperatures are between 50° and 135°F° (10° and 57°C).

Although it is unlikely that your fish will even reach 50°F in 15 minutes, you are free to use a thermometer if you are concerned.

Taking the chill off isn’t going to get your fish up to room temperature, but even raising the temperature a little will help the fish cook more evenly. It will also be less likely to dry out or absorb as much oil.

2. Heat Your Skillet in the Oven

The next thing is to preheat your oven to 450°F/232°C along with the skillet. That way, your pan will be nice and hot when you add the oil and fish.

Although you can make salmon on the stovetop, the way I’m cooking it is in the oven. So it makes perfect sense to preheat the skillet in the oven since it’s already on.

I use a 12-inch skillet, but you can use whatever size you have or the one that will best fit. You don’t want to crowd the fish in the skillet, so keep that in mind as well.

3. Dry Salmon With a Paper Towel

While the oven is preheating and the fish is sitting out, dry both sides with paper towels to get out as much moisture as possible.

Moisture is the enemy of getting the crispy crust on the skin and causing it to steam or the skin to stick.

Not that steamed fish is bad, but that’s not the way we are cooking it. Steamed fish would be cooked differently and most likely not in a cast iron skillet.

You may have to dry it a couple of times, and definitely right before adding the salt.

As the oven is reaching temperature and your fish is dry, add coarse salt to both sides.

I add the salt to the skin side first and don’t put it on the other side until I place the fish in the pan.

Besides seasoning, the salt will help the skin of the fish in two ways:

By now, the oven should have reached 450°, and you can take out your skillet.

And as a side note, did you know coarse salt is also good for cleaning stuck-on food from your skillet?

Since you are cooking at a higher temperature, make sure you use a high smoke point oil.

Add about 1-2 teaspoons of oil or fat, and swirl it around to coat the bottom. I typically use a silicon brush.

Now it’s time to put the fish in.

Place the skin side down, where you should hear a sizzle.

Don’t forget to salt and pepper the flesh side that is facing up.

6. Bake the Salmon in the Oven

Put the skillet back in the oven, and bake for 4-6 minutes per half-inch of fish.

When I made mine, the salmon was only about 3/4-inch thick and some even thinner, so I set the timer for 7 minutes.

While it’s baking, make your sides. Or, if your sides take more time as mine did, you might need to start earlier.

In the video below, Dani cooks her salmon for 15 minutes and has time to make rice and asparagus.

However, when I made ours, we had a salad and baked beans. And the cutting up of veggies took more time (I only had 7 minutes).

I will be the first to admit; my salmon didn’t look as good as the one in the video.

But my husband said it tasted delicious, and that counts for a lot.

It should be noted, the video was my inspiration.

The most significant difference is I used wild salmon, and she used farmed. She talks about the difference between the two in her video.

Also, mine came frozen in a package, and hers was bought fresh. I’m sure that also played a role in why hers not only looked better but probably tasted better too.

Nevertheless, I was happy with mine.

How do I keep salmon skin from sticking to my cast iron skillet?

If that was a question you were asking, I hope you now have some ideas of how to keep it from sticking.

And not only that but at least one way to make salmon so it won’t.

The main factors are:

Hopefully, the next time you make salmon, the skin won’t stick.

If you tried these steps, let me know how it turned out.

2 thoughts on “How Do I Keep Salmon Skin From Sticking to My Cast Iron Skillet? – 6 Easy Steps”