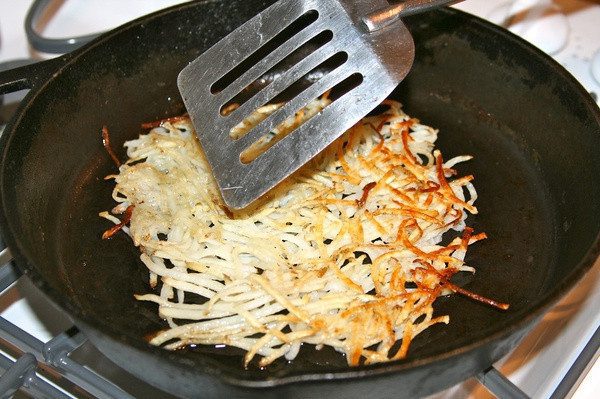 Are you wondering, “Should I oil the food or my cast iron skillet when cooking?”

It can be confusing, and I’m not sure there is a right or wrong way.

However, it’s good to know the pros and cons of each method so you can make an informed decision.

Should I Oil the Food or My Cast Iron Skillet When Cooking?

I don’t think one way is better than the other, but there are a few minor differences. For example, if you oil the food, there will be less splatter when cooking. On the other hand, the oil isn’t added to the pan’s seasoning, which is essential for cast iron cookware. And one reason for adding oil to the pan.

Why You Need Oil When Cooking in Cast Iron

Before we get into whether it’s better to oil the food or put the oil in your cast iron skillet, it’s beneficial to know why you cook with oil in the first place.

There are four main reasons for cooking with oil:

Just a quick note on seasoning: seasoning is oil that has polymerized to the pan’s surface. It’s important for protecting your cast iron cookware from rust, in addition to making it nonstick.

So, keeping in mind the reasons we use oil, let’s look at why each side says their way is better.

The Case For Oiling the Food

I’ll be honest, I have not tried oiling my food before, mainly because oiling the pan has worked for me.

But I did find some of the reasons compelling.

The Case For Oiling the Pan

Oiling the pan is how I have always done it, but I am open to the other way if it works better.

Here are the reasons for putting the oil in the pan:

So I decided to make two batches of roasted vegetables on the stovetop.

For each batch, I used one medium potato, one red onion, approximately one cup of green beans, and one tomato (I forgot I had red pepper).

I cut the vegetables and heated up the skillet.

In the first batch, I put the oil in the pan, and in the second batch, I coated the vegetables with oil. Everything else, I did the same.

The potatoes went in first because they take the longest to cook. After about five minutes, I added the green beans, and soon after, the onions. After another three minutes, I put in the tomatoes.

I didn’t start stirring until I put in the green beans because potatoes are best left alone for a while.

After putting in the tomatoes, I sprinkled garlic powder, onion powder, and a bit of salt. I did a final stir, and they were done.

I thought both turned out pretty much the same, but I noticed a few minor differences while cooking.

I said above, “I will see if this is true” a few times.

And here is what I found out: True or False?

All in all, the differences were minor. The thing I noticed most was the lack of splatter when I coated the vegetables with oil rather than putting the oil in the pan. That was definitely a plus.

However, I also noticed how dry the pan looked where the vegetables weren’t sitting. I was used to there being oil (I thought it smelled different too).

And that’s just it. I don’t think oiling the food allows any of the oil to cook into the pan’s surface.

Which is one of the reasons Lodge gives for adding oil to the pan. They say, “When cooking in cast iron, you should add a little oil to the pan before adding your food. This helps ensure the food doesn’t stick, and it helps build layers of seasoning.”

So, as you can see, adding oil to the pan has one significant advantage over oiling your food. But, ultimately, you can decide which way you think is better.

The question is, “Should I oil the food or my cast iron skillet when cooking?”

Hopefully, you have a better understanding now and can make an informed decision on what to do.

Those who say you should oil your food rather than the pan have several reasons they like their way better. For example, you will have less splatter, and you won’t use as much oil. In other words: less mess and more cost-effective.

However, those who say it’s better to put the oil in the pan have their own reasons. One huge advantage has to do with the pan’s seasoning.

How about you? What did you like or dislike about each way?

2 thoughts on “Should I Oil the Food or My Cast Iron Pan When Cooking?”