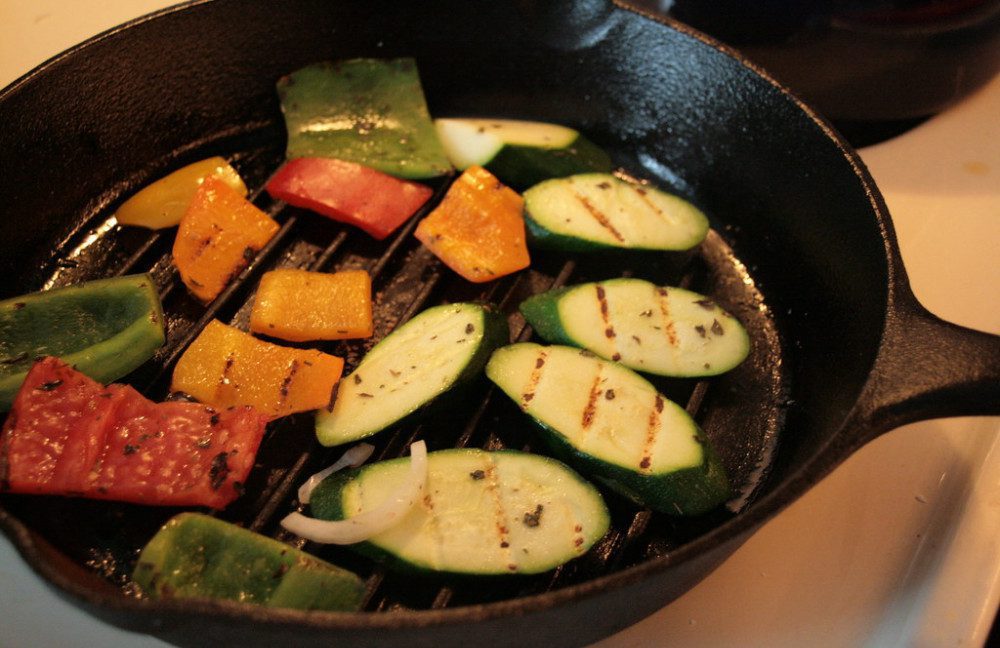 I read about one person who received a ridged pan for a gift and had no idea what to do with it.

So they reached out to the community and asked for ideas.

Maybe you are asking the same question: what do you use a cast iron skillet with ridges for?

It’s an excellent question and as it turns out, there are quite a few uses for one.

So, let’s find out what they are.

What Do You Use a Cast Iron Skillet With Ridges For?

A cast iron skillet with ridges is called a grill pan, and when you think of cooking something on a grill, you think of grill marks. And as it so happens, that’s one of the things people like most about using a grill pan. In addition, this pan is good for cooking foods you want to be elevated above the fats and juices such as burgers, roasts, or even vegetables. And last but not least, the grill pan is used for grilled sandwiches, and especially panini.

When you see grill marks on your food, what’s your first thought? Mine is that the food has been grilled.

I recently went to a local steakhouse where you can cook your own steak over a huge grill. Or you can have the chef cook it for you. Either way, the steak has grill marks, which is pleasing to the eye.

And in this case, the food is grilled.

But do grill marks always mean the food is grilled?

No, it doesn’t. But since it gives the appearance of being grilled, people’s minds are trained to think it is.

The Psychology of Grill Marks

Claudia Ficca, a professional food stylist, tells Thrillist, “It’s important to see the grill marks [on the food products] because that is what makes the food ‘grilled’. Even if the brand uses a smoke flavor and doesn’t actually grill the meat, in advertising and on packaging the grill marks work as a visual cue to the consumer.”

That’s why you will see grill marks on the bag of frozen chicken you buy at the grocery store.

And that is what happens when you use a grill pan to make food.

Grill marks are aesthetically pleasing and make you think the food tastes better, so in that way, you could say they are necessary.

However, grill marks don’t change the flavor of the food, especially if the food hasn’t been grilled.

And even when it is grilled, it doesn’t taste as good as seared.

Although many people’s eyes are trained to value the sight of grill marks, others know better.

Though some people might disagree because what one likes flavor-wise can be subjective and a matter of opinion.

However, I like the way AmazingRibs puts it, “When it comes to most foods, brown is beautiful. Black is not. Tan is not.”

The grill marks are simply coloring on the surface of tan-colored meat. They are pleasant to look at but lack substance.

That’s because brown is the result of the Maillard (My-YAR) Reaction, which gives food both flavor and texture.

Fortunately, there are some more substantial reasons for using a grill pan.

Anything You Want to Elevate Above Its Own Juices

Whether it’s roasts, burgers, or veggies, having a ridged surface can be beneficial.

A grill pan might be for you If you don’t want your food to sit in the grease, juice, or water that comes out of the food while cooking.

It can be used anywhere you would use your flat skillet…on the stovetop, in the oven, on the grill, or over a campfire.

So, what types of food might you want to elevate in your grill pan?

You can probably come up with more.

Above I told you I went to a local steak restaurant that allows you to cook your own steaks over a grill.

Along with my steak, I had Texas toast made over the grill, complete with grill marks.

Well, you can also make Texas toast (with grill marks) in your grill pan.

Add melted butter (plus garlic powder if desired) and toast each side.

Grilled sandwiches, especially paninis, are another common thing to make.

A panini is a grilled sandwich made with Italian bread. It will typically have cheese on it, but you can also add meat or vegetables. I’ve seen them buttered on the outside like you would a grilled cheese or just toasted. The video below will show you one way to make a panini.

Here Are a Few Tips

When using a grill pan, you might want to keep a few things in mind:

Cooking and Culinary Tips: How to Make a Panini Without a Panini Press

So, what do you use a cast iron skillet with ridges for?

Lots of things, but they can be broken down into three categories.

First, are the grill marks that most people find appealing, even when the food hasn’t actually been grilled.

When it comes to steak, I would always choose seared over grill marks, but for other meats and fish, I’m definitely a fan.

Second, any food you would like to elevate so it’s not actually touching a flat surface, whether it’s meat or veggies. Elevating allows any fat and liquid to gather in the grooves below the food.

And third, a grill pan is often used to make grilled sandwiches or toast. Again you will get the grill marks which visually make the sandwich look better.

Not everyone likes using a grill pan, though.

It really depends on what you would do with it.

And after learning about its uses, hopefully, you can make an informed decision on whether it’s something you would like or not.

Or maybe you already have one, and now you have some new ideas of what it can be used for.

Let me know what you think about cast iron grill pans in the comment section below.

Do you or would you use one? If so, how?