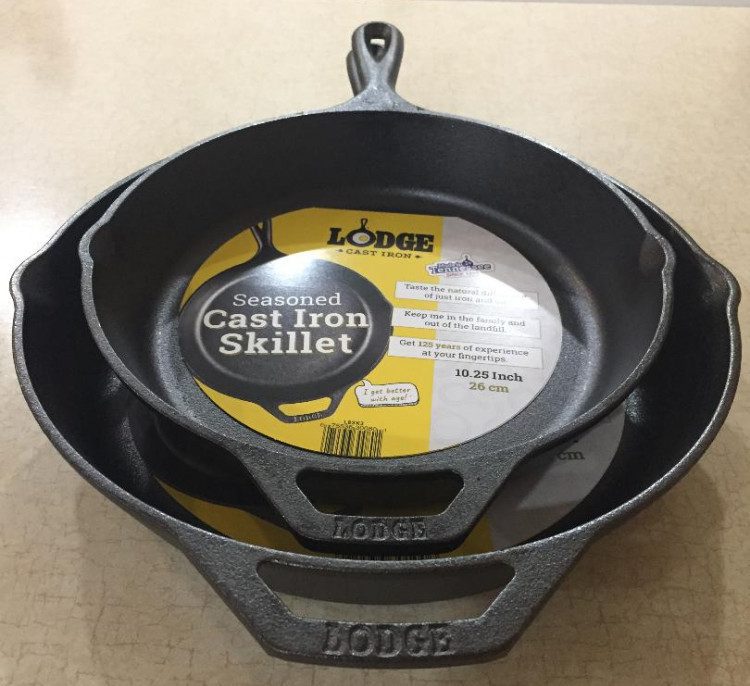 Have you ever wanted to know, “Do I have to season my preseasoned cast iron skillet?”

If you are new to cooking with cast iron and just bought your first skillet, you may have many questions about seasoning.

The first time I cooked in my new skillet, the eggs stuck. After some research, I concluded my pan didn’t come preseasoned, and I needed to season it before using it.

But was I right?

Seasoning is one of those things that often confuse new and old cast iron users alike.

So, even if you’ve been using cast iron for a while, you may still wonder if you have to season the skillet you bought pre-seasoned. Or how often you should do it.

The instructions told you the pan was ready to use, so you did. But does it mean you never have to reseason it?

Let’s look at several questions you might have surrounding cast iron seasoning, including if you have to season a preseasoned pan.

Do I Have to Season My Pre-seasoned Cast Iron Skillet?

You don’t have to season any cast iron cookware before you use it if it comes pre-seasoned. Pre-seasoning means it is ready to use. The instructions generally say you only need to wash and dry the pan before using it. However, some people are not satisfied with the pre-seasoning and choose to season it anyway. And eventually, whether you seasoned your pan when you first got it, you will need to reseason it.

1. What Does It Mean That a Pan is Pre-seasoned?

Pre-seasoned means a coating of oil has been baked onto the pan’s surface by the manufacturer to protect it from rust before it gets to the eventual owner. Baking oil on the iron’s surface is called polymerization.

Preseasoned is the most common way to buy cast iron nowadays.

Manufacturers do not claim that their pre-seasoned pans never have to be reseasoned.

2. How Do I Know If My Cast Iron is Pre-seasoned?

Most cast iron cookware you buy today comes preseasoned. Plus, the instructions that come with the pan should tell you.

However, the first skillet I bought didn’t come with any instructions. I didn’t even know what pre-seasoning was or what unseasoned iron looked like. If I had known, I would have never concluded my pan was unseasoned.

Unseasoned iron will be gray in color, not black. If your skillet is black, it is pre-seasoned.

But just because your skillet is pre-seasoned doesn’t mean it is well-seasoned.

3. How Do I Know if My Pre-seasoned Skillet is Well-seasoned?

Everyone wants a well-seasoned skillet, one that doesn’t stick when you cook with it.

But how do you know?

According to America’s Test Kitchen, “A well-seasoned skillet will have a dark semi-glossy finish and won’t be sticky or greasy to the touch. It won’t have any dull or dry patches.”

They continue by telling you to fry an egg as an easy way to test the seasoning of your skillet. Simply heat 1 tablespoon of oil in the skillet for 3 minutes over medium heat, then add the egg. If you don’t have any major sticking, your pan is considered well-seasoned.

However, being well-seasoned does not mean you don’t have to use any oil when cooking.

Nor does it mean it has to be smooth.

Still, some of you might be wondering which is better: pre-seasoned or unseasoned?

Since it’s tough to find unseasoned cast iron cookware, that should be a good indication that it is not bad.

Before pre-seasoned, Lodge says their cookware was coated with a thin layer of wax to prevent rust until it reached someone’s kitchen.

The wax was soluble and easily washed off, but then the new owner was tasked with seasoning before cooking with their new pan.

Although the label came with brief instructions, people varied in the way they went about seasoning. And many ended up calling the manufacturer for instructions because they didn’t know how to do it.

So, in 2002, Lodge came up with the brilliant idea of pre-seasoning, and the rest is history. They were the first US manufacturers to do this.

Do I Need to Season a New Lodge Cast Iron Skillet?

5. Is It Better to Strip It First or Season Over the Top of the Factory Seasoning?

If you decide your skillet needs more than the factory seasoning, you will have a decision to make.

Strip it or season over the factory seasoning?

Seasoning over the top does not eliminate the textured surface if your pan came that way. Bumpy is in no way inferior to smooth, but many people claim that smooth is more nonstick. And others say that isn’t true.

Stripping your cast iron is obviously more work, but for some, it’s worth it. There are several ways to do it:

In my opinion, the only reason to strip it first is if you want your seasoning a certain way. By stripping the pan, you can make the surface smooth, and therefore the seasoning will be smooth. But you also risk it turning out worse than when you started.

I go into more detail and provide several videos for stripping cast iron in the following article:

RELATED > > > > > Why Strip the Seasoning From My Cast Iron Skillet?

6. How Do I Season Over the Top of the Factory Seasoning?

So, you’ve decided to season on top of the factory seasoning of your new cast iron pan, and you want to know how to do it.

But if you don’t know, here is one way:

RELATED > > > > >Why Do I Need to Cool Cast Iron in the Oven After seasoning? – Three Reasons to Consider

How to Season a New Cast Iron Skillet

7. How Often Do I Need to Season My Cast Iron?

There is no set amount of times you have to reseason your cast iron. As long as it is well-seasoned and working for you, there is no reason to season it.

However, if you start to see flaking, or your food is sticking more and more, it’s time.

Cooking with acidic foods or boiling water for an extended period are two ways your seasoning might be weakened.

In some cases, it might be better to strip the pan and start over.

Of course, this won’t be a problem for a new cast iron pan.

In that case, some experts say to plan on oven seasoning your pan 2-3 times/year.

The best oil is another controversial subject.

Most everyone agrees that just about any cooking oil will work. But for which is the best, that answers are all over the place.

A rule of thumb is to use an oil or fat that’s smoke point is equal to or lower than the temperature at which you bake your pan.

According to Lodge, all cooking oils and fats can be used for seasoning cast iron. But whichever oil you use, make sure you heat up your pan to that oil’s smoke point.

Because when the oil hits its smoke point, a “chemical reaction called polymerization occurs, bonding the oil to your pan to create a layer of natural seasoning.”

A lot was covered, but hopefully, you have a better understanding of seasoning.

As far as asking, “Do I have to season my pre-seasoned cast iron skillet?” you found out you don’t have to, but that there’s more to it.

What do you want from your seasoning or pan? Is it important to you that it’s smooth or do you just want it to be nonstick?

How you answer that question will determine how you proceed.

If you are happy with the factory seasoning because it is nonstick, you will use it immediately.

If you would like to add a bit more seasoning to build it up for further protection, you will go ahead and season it even though it’s pre-seasoned.

And if you don’t like the bumpy texture, you will at least consider stripping the seasoning off and starting over with a smoother pan.

Whatever you decide is fine.

I used all my pans right away but also seasoned them in the oven occasionally.

2 thoughts on “Do I Have to Season My Pre-seasoned Cast Iron Skillet?”