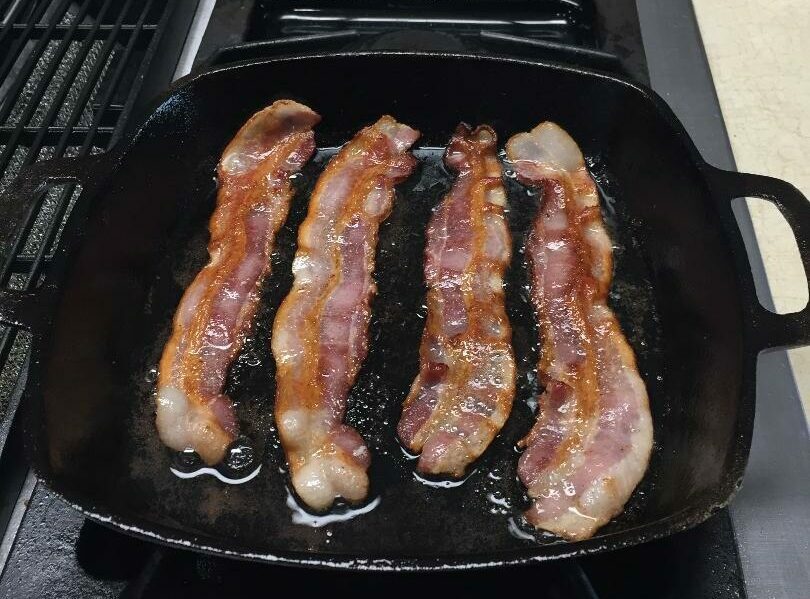 When I first started cooking in cast iron, bacon was the first thing I made.

I’ve since learned there is a debate on whether it’s the best food to make first.

Bacon has plenty of fat, which is a plus, but it also has protein and sugar, so it might stick and stay stuck even as the fat renders.

Admittedly, you might already have an opinion based on your experience.

On the other hand, you may just be looking for an answer as you begin your cast iron cooking journey.

Is It Okay to Make Bacon First in My New Cast Iron Skillet?

At least one expert says bacon is their preferred food to make first in a new cast iron skillet, while others say wait a while before breaking out the bacon. The debate is real because your bacon is likely to stick if you don’t know how to cook it. Of course, if you take the proper steps, it should be no problem at all to make it first.

You buy a new cast iron skillet and decide to make some bacon. You know a little about cast iron from others, so you begin by preheating your skillet over medium heat.

Once the pan reaches 300°F (using your infrared thermometer), you stick two pieces of bacon in the pan.

As you watch it cooking, you notice it sticking a bit. However, you leave it alone, hoping it will release on its own.

But it doesn’t release, and you have to pry it off to turn the bacon over.

The bacon tasted amazing, but you wonder why it stuck and if there is something you did wrong.

I found the above scenario on a Reddit forum, and there were lots of responses. Most of them fell into one of the following five solutions.

1. Cook more bacon. Two pieces didn’t render enough fat, so they stuck. Besides, you can never have enough bacon. On the other hand, make sure you don’t overcrowd the pan because then you will have other problems.

2. Make your bacon in the oven. Oven-cooked bacon is the best bacon you will ever have. And it will never stick. Simply put it in the oven (on a rack with a baking sheet) and cook to your desired texture. Oven temperatures ranged from 275°F to 400°F.

3. Start with a cold pan and cook it low and slow. Flip your bacon often and move it around to keep the grease spread out. This lets the fat render out slowly, and your bacon won’t stick. You can even turn the heat up at the end for crispiness.

4. Be patient and use a little fat or oil. A new pan is not seasoned as well as a pan you’ve cooked in for a while. So add a little grease or oil for now when cooking bacon. Later it won’t be necessary.

5. Reseason your pan because you can’t trust the factory pre-seasoning. The factory seasoning mainly protects your pan from rusting before you get it. It doesn’t help it be nonstick. So, go ahead and reseason it and then cook your bacon.

Interestingly, not one person said you shouldn’t cook bacon when your skillet is new.

RELATED > > > > > Should I Preheat My Cast Iron Skillet to Make Bacon?

What Some Experts Say

According to Stargazer, bacon is not the ideal food to cook first. And definitely not in a cold pan. The problem is that meat in cold cast iron is more likely to stick.

Furthermore, they recommend using extra oil in a preheated skillet if you are going to cook bacon in your new pan.

According to Finex, bacon is the best food to cook in your new cast iron skillet. Or at least it’s their personal favorite. However, they don’t explain why.

According to Field Company, you should wait until you have a feel for your skillet before attempting to cook bacon. And when you do, you can choose either the cold or hor pan method (click on the link to see each technique).

My Opinion From Experience

As I said, bacon was the first thing I made in my cast iron skillet, and it did stick a little.

The second thing I made in the bacon grease was eggs, and they really stuck.

At first, I wondered if the eggs stuck because I cooked them in bacon grease or didn’t have enough fat.

After researching, I concluded I needed to season my pan in the oven.

It helped a little, but the bacon or eggs would routinely stick.

Although I never found out if making eggs in bacon grease was a good or bad idea, I did continue cooking them that way. I have no problem with the eggs sticking most of the time, but I still wonder about my pan.

I bought it from Menards, a large hardware store I worked at for a long time. It came with no instructions, and I don’t know if it was pre-seasoned or painted black (it had a smooth surface). It doesn’t seem to build many layers of seasoning even though I cook in it every morning.

That’s not the case with my Lodge skillets. I can see the layers slowly building and the pan getting smoother.

But I can’t complain because the bacon and eggs hardly ever stick now.

I think I tried every solution, though, to get my pan to where it didn’t stick.

First, I seasoned my skillet in the oven (solution #5).

At the time, I was preheating my skillet before adding the bacon.

Then I learned that I should start in a cold skillet, so I did that for a while (solution # 3). But I didn’t see any difference.

Eventually, I went back to preheating my skillet first. I don’t time it, but I always heat it slowly and long enough to hear the sizzle when the meat hits the pan.

However, I haven’t made my bacon in the oven (solution #2), nor have I ever added extra fat before cooking it. But I do agree that patience with your pan is needed (solution #4). And since I’ve always made more than two pieces of bacon, I had solution #1 covered already.

If I had to choose what would work best, I would say that all five solutions are worth a shot. I think it’s okay to cook bacon first as long as you know that it might stick.

My best advice is patience and possibly waiting until you have a feel for your pan.

As you can see, making bacon first in your new cast iron skillet can be a problem. However, there are several solutions, and any one of them may work for you.

It may be best to hold off on making bacon until you understand how to cook with cast iron. And when you do cook bacon for the first time, you can try several methods.

You might want to start by cooking more bacon if you only make one or two pieces.

Some people prefer cooking it in the oven and say it doesn’t stick.

Others swear starting with a cold pan is the best way to go because the fat will render as the pan heats and cooks the bacon. However, this method has some controversy since meat and a cold cast iron surface don’t really go together.

You can always add a little extra fat or oil if you are having trouble with it sticking in a preheated skillet.

But most important, remember that your pan is new and isn’t as nonstick as it will be later. As you continue cooking, it will build up layers of seasoning, and your food, including bacon, won’t stick.

And go ahead and reseason it if you want to move the process along a little quicker.

Which method or solution do you want to try?