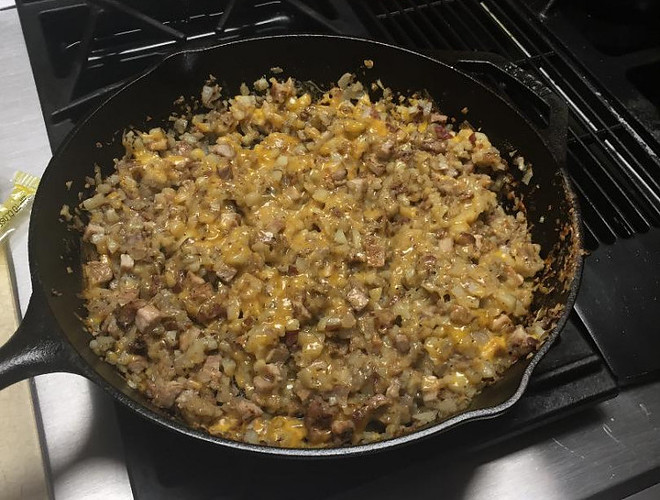 Are you looking for a simple but delicious meal to make in your cast iron skillet?

Something new and different?

If that is you, you might want to try this easy Skillet Hashbrowns and Pork recipe.

This Skillet Hashbrowns and Pork is an uncomplicated meal to make. It only requires a few ingredients and five easy steps. It calls for you to make it in cast iron and use a lid, but both of these things are optional. Of course, cooking in cast iron will make it taste better because it will give you the brown crust, also known as the Maillard Reaction.

Here are a couple of tips:

Now for some variations:

How I Made This Skillet Meal

I came across this recipe when I was looking for a way to use my new cast iron lid.

I had successfully used the lid for boiling water quicker, but now I wanted to use it on food.

Plus, I found a recipe that was simple and tasted great.

It was a win-win.

As far as the recipe goes, I made it pretty much as directed, with a few changes:

One nice thing about this meal is it only took about 30 minutes to make from start to finish, including chopping the potatoes, onion, and pepper. And cutting up the meat.

And with only having a few steps, I didn’t forget anything.

The recipe says it makes six servings, but that wasn’t really the case for us. It was more like three. My husband ate maybe three to four cups, and I had one or a bit more. And we had a little leftover.

Maybe if you had a salad or some bread or soup with it? I don’t know. We didn’t have anything else.

What do you think? Would you want something else with the meal, or would it be enough?

I hope you enjoyed this easy Skillet Hashbrowns and Pork recipe.

It is simple to make and doesn’t take long.

In fact, it can be a template meal.

You could use 2 cups of chicken instead of pork or a bag of frozen mixed vegetables in place of the onion and peppers.

Maybe you want to make it with rice and Colby jack cheese. Go for it!

Variations are what make this recipe so versatile.

Lodge 12-inch Cast Iron Lid Review – Do You Need One?