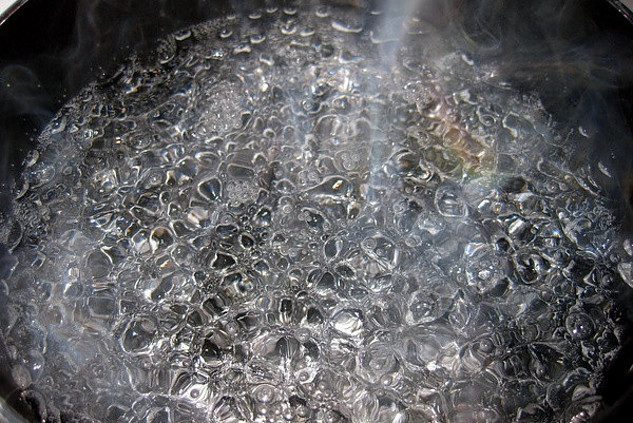 Has anyone ever asked, “Can I boil pasta in my cast iron?”

Surely, I am not the only one who’s asked this question.

Maybe you’ve heard that you can cook anything in cast iron.

But you’re not sure about pasta.

So, first, you must define what type of cast iron you’re using, because there is a difference between boiling water in a seasoned cast iron skillet and using an enameled dutch oven.

Then, let’s look at the two types of cast iron and find out if either of them is suitable for boiling pasta.

Can I Boil Pasta in My Cast Iron?

The simple answer is yes. You can boil pasta in cast iron. However, the better question might be, is it wise? When boiling anything in seasoned cast iron, you risk weakening or removing the seasoning. And boiling in an enameled cast iron is less efficient. In addition, cast iron is heavy; therefore, you will need to make sure you can carry it when it’s full of water.

1. I Don’t Even Boil Water in My Cast Iron

In the first view, you would never boil pasta in a seasoned cast iron pan.

Because if you don’t boil water in it, then how can you boil pasta?

However, there are some good reasons for not boiling water.

And all of them have to do with what boiling does to the seasoning:

This view is only talking about seasoned cast iron, but what about an enameled dutch oven?

Can you boil water or pasta in it?

RELATED > > > > > Is It Okay to Boil Water in Seasoned Cast Iron- Or Water-Based Foods?

2. Is a Dutch Oven Ideal For Boiling Water For Pasta?

The second view is solely about cast iron dutch ovens, both seasoned and enameled.

I read a statement about how dutch ovens were ideal for boiling water for pasta (along with other things), but I wanted to know more.

So, what did I find?

The article that made the statement went on to name six tips for using a dutch oven but didn’t expand on any of the things for which it was ideal.

So I didn’t learn much.

The following article was confusing because it said the best pasta pot was a dutch oven but it boiled the noodles in a stockpot in the recipe.

I realized “pasta” was how they described the meal and was more about using the enameled dutch oven as a serving dish than boiling the pasta in water.

Finally, I found an article that said you could boil water in either type of cast iron dutch oven, seasoned or enameled, but it probably wasn’t ideal.

Because, in seasoned cast iron, you risked the seasoning breaking down.

And in an enameled dutch oven, it would take much longer to get the water to the boiling point.

Therefore, I came to the same conclusion: that a dutch oven, seasoned or enameled, is not ideal for boiling pasta.

3. As Long As You Understand It Can Weaken Your Seasoning

A third view says as long as you know what boiling water can do to the seasoning, there is no reason not to boil pasta.

After all, you can reseason it when you’re finished.

Unfortunately, I didn’t find this view very helpful because if your seasoning is damaged, you have to reseason your pan in the oven.

And why would you want to do that when you can just boil your pasta in another type of cookware?

A fourth view and one I agree with is, it’s not worth it.

I’ve already gone over the reasons.

But to recap, boiling water for an extended period will break down the seasoning of cast iron. And the water will take longer to boil in enamel.

Additionally, it’s heavier, making it all the more difficult to carry to the sink so you can drain it.

However, one person points out that it is the right tool when camping.

Throw the pan on the fire or camp stove, boil some water, and dump in the pasta. Keep adding water until it’s al dente. Then let the water boil down, add your sauce and cooked meat, simmer, add cheese, and chow down.

5. Nobody Would Boil Pasta in a Cast Iron Skillet…Until Now

After reading the many reasons that boiling pasta in cast iron is the wrong choice, this fifth view says wait a minute.

This view is from a man who was addicted to buying every pot and pan he could find.

He compared it to how some people buy shoes.

And he wanted a pan for every occasion.

One day his wife asked him if he ever got tired of having so many pans and then pointed to his 10-inch cast iron skillet and remarked that he could probably make everything with just that one pan.

So he challenged himself to use only that one skillet for a month.

He wanted to make macaroni and cheese at one point but thought nobody boils pasta in cast iron.

Then he remembered food scientist Harold McGee saying you can “happily cook noodles in small amounts of water.”

So he filled his skillet 1/2 inch from the top and boiled the macaroni.

And it not only worked, but he also found two advantages: the water boiled quickly, plus the pasta water left was “extra-rich with starch” and could be saved to use in pasta sauce recipes.

So there you have it.

Of course, he didn’t say anything about the seasoning in his pan being weakened.

I don’t think so.

My guess is if you often boil in your cast iron, you absolutely run the risk of breaking down the seasoning.

But once in a while might not matter too much.

On the other hand, there is a way to cook your pasta in cast iron without boiling, and you can find the recipe in the video below.

Hopefully, you have found the five views in response to “Can I boil pasta in cast iron?” enlightening and helpful.

For one reason or another, most agree that boiling pasta in cast iron is not the best choice.

And that’s because it can weaken and possibly release the seasoning, causing it to get patchy or flake.

Although there is no seasoning to worry about with an enameled dutch oven, it is bigger and heavier and takes longer to boil the water.

Therefore, it makes little sense to use either type of cast iron to boil pasta.

Unless, by chance, you’re camping or in the middle of a challenge to use only cast iron.

So, with which view do you most identify?

Would you cook pasta in cast iron?

Or if you’re in the market for a cast iron skillet, so you can cook, not boil, your noodles (or for any other reason), check out

WHICH SIZE CAST IRON SKILLET SHOULD I GET ? – 5 PANS TO CONSIDER