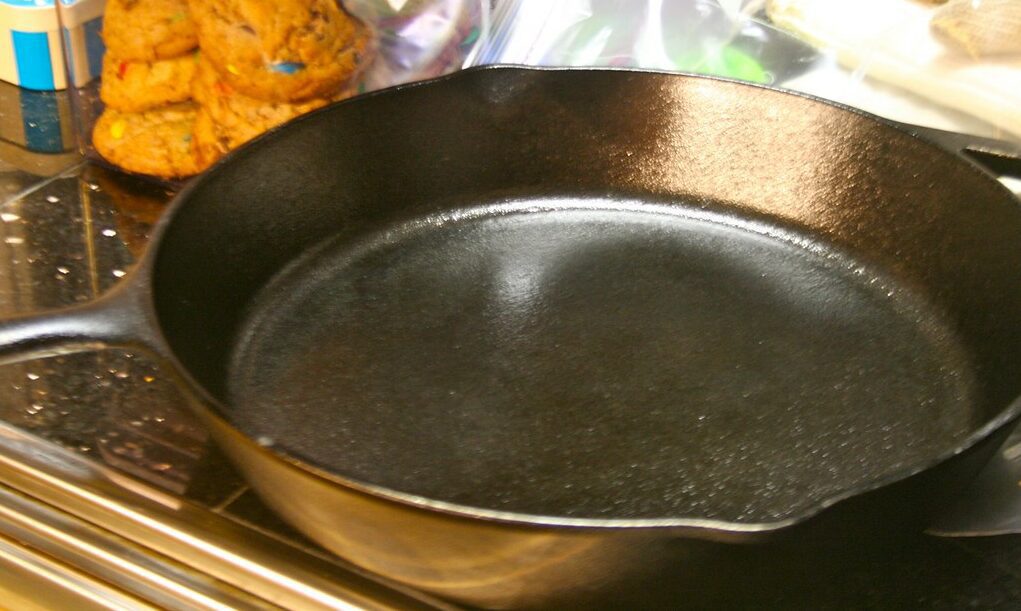 Have you ever wondered, “Why is cast iron cookware black?”

I mean, iron isn’t black, so why isn’t my pan the color of iron?

That’s a good question and one we are going to look at right now.

Why Is Cast Iron Cookware Black?

The reason cast iron cookware is black is because of the patina or seasoning. When cast iron comes out of the mold, and before it is seasoned, it is more of a dull gray. But after the oil is applied and heated at a high temperature, the pan turns black. If you have seasoned your pan in the oven, you get the basic idea of what happens at the manufacturer. When oil is bonded to the surface of the pan, it naturally turns dark.

The Stages of Making Cast Iron

Your cast iron pan went through various stages to become what it is. One of the stages is seasoning and the point at which your pan goes from gray to black.

But there are a few steps before your pan gets to the seasoning stage.

All foundries will do things a little differently, but the steps will be the same.

How Cast Iron Pans Are Made

The place to begin is in the scrap area where you find all the raw materials.

The raw materials are loaded into bins and transported to the melting area.

Once the metals get to the melting area, they are dumped into the furnace and melted down to molten iron.

As the iron turns molten, the impurities float to the top, and a machine goes in and removes the dross.

The molten iron is then dumped into large ladles and taken to the next area.

In the molding area, the molten iron is slagged again and poured into sand molds.

Sand can handle the hot molten iron because it won’t melt until it’s somewhere above 3000°F.

And since the sand isn’t damaged in any way, the factory can use it again in future castings.

After that, the sand gets mixed with clay before it is turned into a mold.

Larger foundries like Lodge Cast Iron have a machine that makes the mold, but smaller manufacturing companies do more things by hand as their production is smaller.

So, once the mold is ready, the molten iron is poured in. Then it has to cool.

Once it cools, the molds are broken open, and you have a pan.

Workers pick through the pans and other materials in larger foundries as the castings move down the belt, and they discard whatever isn’t good enough.

By discard, I mean they send it back to the scrap area.

The workers send the discarded pans and gates to the scrap area to be melted down and used again while the rest go into the cleaning machine to remove any sand left on the pan.

In a smaller company, you might do this by hand, as well as some finish work.

But in a larger facility, the cast iron goes through a cleaning machine with soap, water, and steel beads.

So, it goes in one way and comes out looking beautiful and somewhat gray.

In some foundries, an extra step goes into sanding down the pebbly surface from the sand mold.

But this is a time-consuming and expensive step and generally means the cookware will be more expensive.

At foundries such as Lodge, they have opted to skip this step and keep the pebbly surface.

The pan is now ready for seasoning.

Again, in a more extensive foundry, the seasoning process will look different than in a smaller one, but in both, you apply oil to the pan and heat in an oven at a high temperature, much like you would do in your kitchen.

When the pan comes out of the oven, it will now be black.

The seasoning primarily protects it from rust, but it also helps with the nonstick properties that people like.

Getting Your New Cast Iron Skillet

When you get a new cast iron skillet, it probably has been preseasoned, which is nice because it comes pan-ready. But it doesn’t mean you don’t ever have to season it again.

You will need to season your pan in between uses for maximum protection and keeping it nonstick.

And you will occasionally need to season it in the oven for one reason or another.

In fact, some people still season a pebbly cast iron pan for added protection and to start filling in the surface to make it smooth.

I can’t tell you how many people want a smooth finish and are willing to do the work themselves rather than pay for an expensive pan.

But that’s the beauty of cast iron; you can choose.

If you want a smooth surface but don’t want to pay the extras money, you can do it yourself.

And if you want a smooth surface and don’t mind the expense, there are some very high-end brands out there, such as Stargazer or Finex.

But you also have the option of buying a less expensive brand such as Lodge, knowing you are getting a quality pan, and using it as it is.

Or you might even like the idea of looking for vintage pans such as Wagner and Griswold, either in good condition or to restore.

Well, if you read this article because you wanted to know, “Why is cast iron cookware black?” you found out it has to do with the seasoning or the protective coating that the manufacturer puts on the cast iron to protect it from rust.

In its natural state, cast iron is more of a gray color and doesn’t become black until after the oil has been baked on.

In addition, you also learned about the production and stages of how to make cast iron and why seasoning is important.

If you are looking for a cast iron, check out my review on A Lodge 12-Inch Cast Iron Skillet Review.