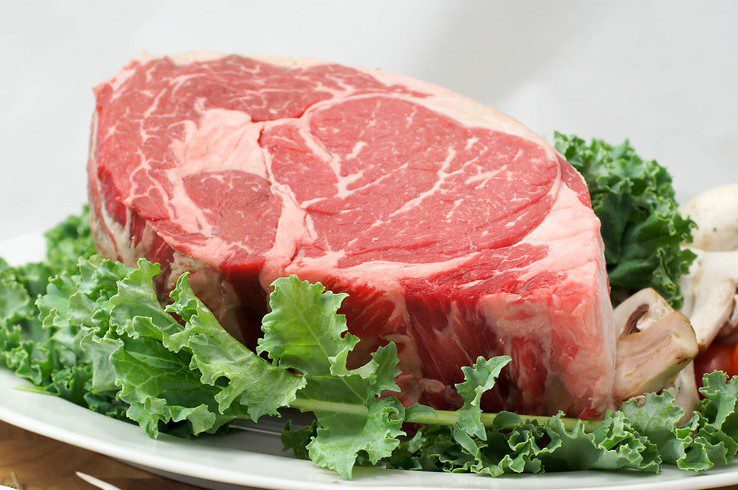 Ribeye is a favorite cut of steak and generally more on the expensive side.

So, why does ribeye have so much fat?

You would think the more fat in the meat, the less it would cost.

After all, aren’t you paying for the meat? And not the fat?

Why Does Ribeye Have So Much Fat?

The main reason for ribeye having so much fat is because it comes from the rib area of the cow with the most marbled fat. Marbling is fat sprinkled throughout the steak and the reason it is moist and tender. Fat also adds flavor. So, instead of fat being a bad thing, the fat in a ribeye is what makes it desirable.

What is a Ribeye?

I won’t spend too much time here since most people know that a ribeye is a steak.

But if you would like to know more, click on this article, The Butcher’s Guide: What is a Ribeye from Omaha Steaks.

I will just mention that it comes from the rib of the cow.

In fact, steaks that come from the rib are some of as the best cuts of beef.

It’s All About the Fat

The fat is what adds flavor, tenderness, and juiciness.

All steak has some fat, but not all cuts have the same amount or type.

The best kind of fat you can get in a steak is called marbling. And ribeyes have the best marbling.

Marbling is the best partly because having little bits of fat throughout the steak is better than big chunks. Unless, of course, you like a bite of fat with no meat.

But big chunks of fat is not marbling even though it will still add flavor when it renders (melts).

If for whatever reason, you don’t like the big chunk of fat and you want to cut it out, it is easier to remove it before you cook the steak than after.

Another reason marbling is the best kind of fat is because it’s intramuscular, meaning the fat is inside the muscle.

As the marbling renders, usually above 130°F, it coats the muscle fibers giving it a rich buttery texture.

But if you cook your ribeye rare or blue rare, you are cooking your meat to less than 130°F, and the fat doesn’t render. Therefore, the texture will be different.

But, generally, it is best to cook a ribeye to at least medium-rare for the maximum rendering of the fat.

And even though a ribeye has the most marbling, it may also have a chunk of fat in the middle.

But, just to be clear, that chunk of fat is not marbling and not what makes a ribeye a favorite cut of meat.

To learn more about marbling, Steak University has a good article, Why Marbling Steak Matters.

With a ribeye, you also have the choice of bone-in or boneless.

Bone-In vs Boneless: Does It Matter?

With or Without the Bone

I confess I didn’t even know there was a debate about which is better. My husband enjoys eating the meat attached to the bone, so I was interested in finding out why a group is advocating for a ribeye without a bone.

The Case For the Bone-in Crowd (of which my husband belongs):

A bone-in ribeye is sometimes called a cowboy steak. And the story I heard about how it got its name is cowboys used to say that the yellow marrow on the outside of the bone was prairie butter because of how good the steak tasted when the marrow seeped into the meat.

Another reason I heard was that cowboys used the bone as a handle when eating.

Who knows the real reason.

But what’s important is finding out why some people prefer having the bone in their steak.

I started by asking my husband why he liked bone-in better, and he gave two reasons. He likes:

He also said he liked the flavor the bone (or marrow) gave when stewing or cooking the beef for a longer time. But he knew this wouldn’t be true when you cooked the steak quickly, like searing in cast iron or on the grill, that wouldn’t apply.

Still, the bone-in crowd’s main reason why they think it’s better is that the flavors from the bone marrow do transfer to the steak while cooking.

So, who is right?

The Case for the Boneless Crowd:

A boneless ribeye is sometimes called a Delmonico Steak.

But if you think the story behind a Cowboy Steak is a mystery, then you should hear all the different claims about the origin of the Delmonico Steak. I won’t go into it all here, but you can read about it at Steak Perfection, Delmonico steak: a mystery solved.

Whether or not a boneless ribeye is a Delmonico Steak or not isn’t really the issue. The question is, is leaving the bone in better?

I was surprised at all the reasons given, and most of them are pretty legitimate, IMO. Having no bone:

Well, it looks like my husband might be right about the marrow not having time to add any extra flavor to the ribeye, but the only way to know for sure is to make one of each, cook them the same way, and do a blind test.

And because I’m not sure the debate is settled, it may be a matter of preference.

Well, there you have it!

Why does ribeye have so much fat? Because that’s what makes the steak taste so good. And when the fat renders into the muscle fibers of the meat, you get a moist, juicy, tender steak.

And isn’t that what everyone wants?

So, there may be a debate about whether a ribeye with the bone-in is better than one that is boneless, but there is no question about how good a ribeye steak tastes.

Like the guy in the video above, my favorite way is to make a steak in cast iron. The heavy metal of the iron holds in the heat and makes for the best sear. And what is better than a ribeye? A ribeye that has been seared.

If you are looking for a cast iron skillet so you can sear a ribeye with all its delicious marbling, check out one of my reviews.