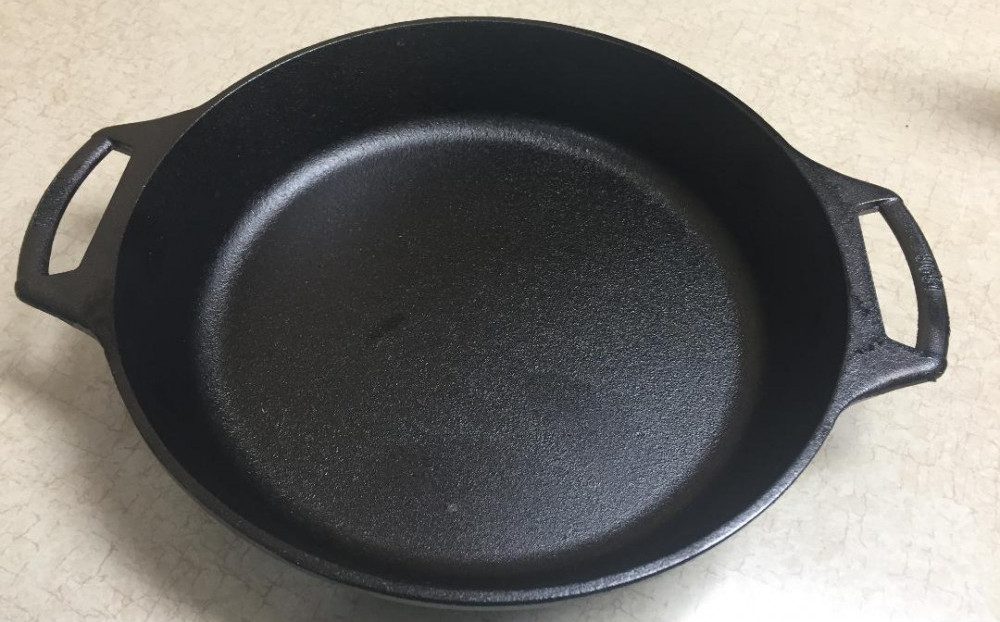 I recently bought two Lodge cast iron skillets of the same size. Both were 10.25-inch pans, and both came pre-seasoned.

One had a longer handle and was from the classic collection and the other was part of the bakeware collection.

The Lodge cast iron skillet I am reviewing here is the one from the bakeware collection.

The Difference Between the Classic Skillet and the Baker’s Skillet

As you can see, there are quite a few similarities but also some differences between the two skillets. It would appear that the baker’s skillet can’t do anything that the classic skillet doesn’t do. That is true.

So why would I buy a baker’s skillet? I will tell you my reason, but it may sound silly. I wanted a round pan with loop handles. That’s the reason. I had no idea it would weigh less or that I might not be able to use it anywhere besides the oven. Do I regret it? Not at all.

I like to bake, and it is nice having a skillet just for baking. That it weighs less is an added benefit and as I said, I also bought a classic 10.25-inch skillet. I am glad I have both.

There are several reasons why I like the baker’s skillet. When I ordered it, I thought it would be nice to have a round pan with loop handles and a round skillet with an easy-grip handle, and one assist loop handle. That is what was going through my mind.

At the time, the only cast iron skillet I owned was a square 10X10 pan that had come unseasoned. I was washing it after breakfast and often using it again at dinner. Sometimes I wished I had more than one skillet to make two different things at the same time. And I was experimenting with desserts and making cornbread. I also thought it would be nice to have a round skillet.

I had no idea it would weigh less. When I first picked it up, my thought was, “Whoa, this is light compared to my other skillets.” And for the many reasons I like having the baker’s skillet, that may be the number one difference I enjoy; even more than having the loop handles and being round. Another reason I like this skillet has less to do with having a baker’s skillet and more to do with having another skillet.

Here are a few reasons I like the baker’s skillet:

Here’s a couple of things I don’t like about the baker’s skillet:

That’s as close to a negative that I could find. Although I’m not overly bothered by the negatives since I have other cast iron skillets, I probably wouldn’t buy the baker’s skillet if I only had one.

You have heard why I like having the baker’s skillet and what I don’t like, but what are others saying?

One person is thrilled with the pan. They used it to make a pan pizza and said it didn’t stick.

Another person who hadn’t used their baker’s skillet yet, liked it because it fit nicely inside their dutch oven for storage and the silicone grips had interlocking grips that fit perfectly on the loop handles. This person said they would use their skillet on the grill and in the oven to bake cobbler and deep-dish pizza.

Someone else liked that the pan worked great for baking rolls, and they used it as a frying pan as well.

Overall, this looks like a great skillet with high marks. However, I was surprised that no one mentioned the lighter weight as that is what I found most remarkable.

It’s also nice that you can get grips for handling it while it’s hot. At our house, my husband uses the grips, but I continue to use my oven mitts.

Some of the more popular uses of this baking dish, and according to what others said, are deep-dish pizza, cobbler, and rolls. I started using mine by baking a chocolate chip skillet cookie.

You found out how it’s the same and how it is different from the classic cast iron skillet of the same size.

I shared what I like about this pan and what I don’t. And you’ve heard what others are saying.

The main con is it’s not as versatile as the classic skillet, and therefore if I could only have one, I wouldn’t get the baker’s skillet.

But as an additional skillet, I couldn’t be happier with this purchase. I highly recommend it if you are looking for a cast iron skillet for baking.