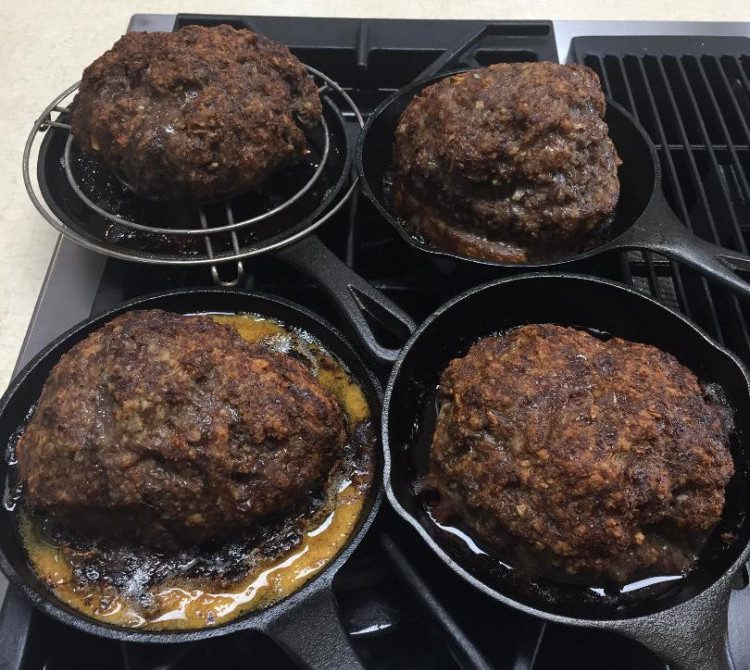 I can’t be the only one who’s asking, “How do I make skillet meatloaf less greasy?”

I’ve always made my meatloaf on a cooling rack sitting inside a foil-lined baking sheet to catch the grease.

But last week, my brother asked me to make meatloaf in a cast iron skillet for Thanksgiving (along with the turkey my husband is making). And I agreed to do it.

However, I’ve never done it before, and I’ve heard stories of how meatloaf cooks in its own grease when made in a loaf pan.

Won’t it be the same in a cast iron skillet?

Therefore, I need to practice!

I usually use 1 1/2 pounds of meat and shape it into two loaves. Today I experimented using 3 pounds of ground beef. I shaped it into four loaves and cooked it four different ways in four 6 or 7-inch cast iron skillets.

Did any of them turn out less greasy than the other?

How Do I Make Skillet Meatloaf Less Greasy?

If you make your meatloaf in a cast iron skillet, there will be grease in the pan. As the meatloaf cooks, it shrinks and pulls away from the edges, and all the fat stays outside. The bottom of the meatloaf gets crispy if it is in contact with the pan. Therefore, it’s more like searing, and it tastes terrific. Another way to consider is cooking the meatloaf on a cooling rack. This gets the meat off the bottom and out of the grease. Two other ways include setting the meatloaf on a slice of bread or sprinkling cornmeal around the edges of the skillet to soak up some of the grease.

In the first skillet, I covered the bottom with cornmeal.

If you look closely, you can see it around the bottom edges.

The cornmeal baked right onto the meatloaf.

But I suppose that shouldn’t be surprising.

While it’s still in the pan, it looks like the meatloaf is sitting in a lot of grease, but it wasn’t greasy when I took it out.

I’m guessing the cornmeal soaked up some of it, but I’m not sure it worked the way I was hoping it would.

The bottom was somewhat crispy because of the cornmeal, and it had a bit of a burnt taste.

But I kind of liked it.

When it came time to clean the pan, it was the easiest one of all.

I wiped out the grease and rinsed it in hot water.

I only needed to scrape one small area on the pan.

In the second skillet, I put in a slice of bread.

And the bread did an excellent job of soaking up the grease.

Unfortunately, the bottom didn’t get crispy at all.

But again, that’s probably not too surprising.

This meatloaf wasn’t greasy either.

Just to be safe, when I took the meatloaf out of the pans, I set them on a cooling rack to see how much grease would drip.

And this one had the least, with only two drips.

However, the clean-up was a bit more work.

Some of the bread had baked on, and it took some work to get it all scraped off.

Generally, I heat up the pan and put it under cold water.

Whatever doesn’t come off, I scrape. And rinse some more.

But I didn’t use soap because I didn’t think it would help this time.

For the third skillet, I used a cooling rack.

As you can see, it didn’t fit inside the pan, but it worked.

You also can’t see in the picture how much grease is in the bottom, but it’s there.

The bottom didn’t crisp up, but the rest of it looked like all the others.

It wasn’t greasy, and when I had it on the cooling rack, it also didn’t drip much grease.

Clean-up wasn’t too bad either.

I wiped out the grease, heated the pan up, and rinsed it under hot water.

The brush got the rest.

I didn’t put foil on any of the pans like I usually would because I thought I might try to make gravy.

But I didn’t even try.

Honestly, now that I think of it, foil would have saved me all kinds of work cleaning up.

Last but not least, in the fourth skillet, I did nothing.

I put the meat in the pan and spread it out. It filled the whole pan.

As you can see in the picture, it shrunk and pulled away from the edges.

All the meatloaf shrunk but held their shape so, again, I wasn’t surprised.

Yep, there was quite a bit of grease around the edges, but the bottom had crisped, so when I took it out of the pan, it also wasn’t greasy.

However, while sitting on the cooling rack, it dripped the most grease.

I set each one on a paper towel to ensure they weren’t greasy, and none of them were.

The “nothing” meatloaf had the most grease of all of them, but it wasn’t bad at all.

Finally came the time to taste them, and guess what?

They all tasted the same to me.

If what you don’t want is the sight of grease, then use a piece of bread.

But if what you want is a less greasy meatloaf, then all these methods work.

My Meatloaf Recipe Passed Down From My Mom

Note: besides the cooking methods referenced above, the only other thing I did differently from this recipe is I preheated the skillets in the oven, put a thin layer of grapeseed oil on each skillet, and doubled the recipe.

If you were asking, “How do I make skillet meatloaf less greasy?” hopefully, you have a better understanding of how to do it.

Since none of my meatloaves turned out greasy, I think any of the four methods will work.

However, some methods clearly did a better job of soaking up the grease or keeping it from touching the meatloaf.

Bread probably did the best job of soaking up the grease, but the cooling rack kept the meat from coming in contact with the grease at all.

The only method that gave you the seared bottom was cooking the meatloaf in the skillet as is.

And it wasn’t greasy after taking it out of the pan.

Anyway, I hope this experiment has been helpful.

Do you think you will try one of these methods?