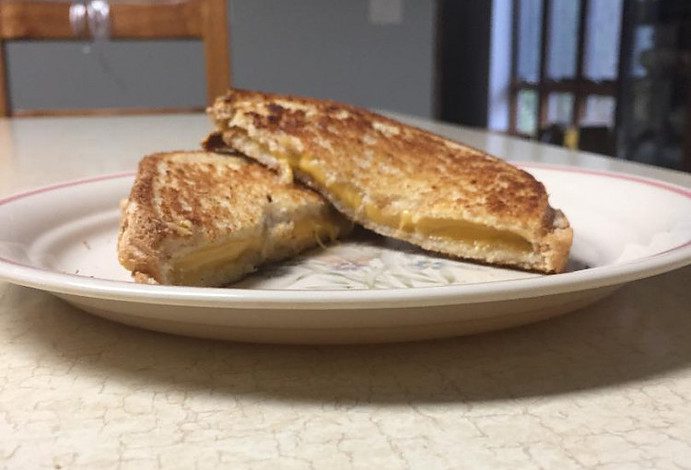 And if it’s happening to you, you may be asking, “Why does grilled cheese stick to my cast iron skillet?”

You feel like you’re doing everything right and don’t know what to do differently.

Although you don’t want to stop using cast iron, you know you probably wouldn’t have this problem with Teflon.

What should you do?

Well, before you give up and turn to another type of pan, let’s find out what some potential reasons might be.

Why Does Grilled Cheese Stick to My Cast Iron Skillet?

Grilled cheese shouldn’t stick to your cast iron skillet. So, if it is, one reason might be because your skillet needs to be reseasoned. This is usually the case when food that doesn’t normally stick is now sticking. Another reason is that you are using margarine and not butter. Because margarine has water in it, it will interact with the iron differently than butter. Or it might be a combination of both.

I’ll be honest, I have never had a grilled cheese stick to my cast iron skillet.

If people weren’t talking about it, saying how frustrated they are, I would think it never happened to anyone.

As I read about others who have had this problem, many suggestions were given. Some of the things people said didn’t make sense to me, so now I hesitate to write them as solutions.

Additionally, I decided to experiment a little but couldn’t get my bread to stick.

So let’s go over some reasons given and decide whether there is any validity to them or not.

Your Using Too Much or the Wrong Cheese

The idea is when you use too much cheese, it oozes out of the bread and sticks to the pan. And that makes it harder to turn your sandwich over. Therefore the bread is stuck.

I find this highly unlikely and probably not the reason why someone’s grilled cheese is sticking.

As far as using the wrong cheese, I didn’t know there was a cheese that could cause your bread to stick to the pan.

Moreover, too many people commented that they had used many types of cheese and never had a problem.

You Have to Use the Right Kind of Bread

The idea behind this reason is low-quality bread is more likely to stick.

I’ve used lots of so-called “low-quality” bread and have never had an issue with sticking.

For this reason, I don’t think the kind of bread you use has any bearing on why a grilled cheese would stick to a cast iron skillet.

The Temperature is Wrong

Temperature indeed plays a significant role in cooking with cast iron, depending on what you are making.

But for grilled cheese, does it matter?

I always preheat my skillet before making grilled cheese, so I decided to see what would happen if I didn’t.

Nothing different. Other than taking slightly longer to cook, it didn’t come close to sticking.

However, that doesn’t mean you can crank up the heat. Always heat your cast iron on medium or low heat.

Making grilled cheese on high heat might cause it to burn but not stick.

I’m not sure why this would help if you have butter in the pan, but it’s possible, I suppose.

Admittedly, I have never done this.

I did watch a video that showed how rubbing Crisco all over your skillet before adding butter to cook an egg helped the egg not to stick.

However, cooking an egg and cooking a grilled cheese in cast iron is entirely different.

In fact, eggs are the ultimate test for finding out if your pan is well-seasoned.

Because eggs sticking in cast iron is a widespread problem.

But grilled cheese shouldn’t stick, so I don’t think cooking spray will solve the problem.

On the other hand, many people said they either sprayed a nonstick spray first or added oil to the pan. Plus, they buttered their bread.

You Need a Nonstick Pan

By nonstick, I assume they mean Teflon or some chemically added coating to make it nonstick.

In other words, not cast iron.

While this will work, it’s not ideal.

And some people who use cast iron don’t use Teflon. Though I’m sure many people use both.

Regardless, your cast iron skillet should not be causing your grilled cheese to stick.

And if it is, you most likely need to reseason it.

Because a well-seasoned cast iron skillet is virtually nonstick.

So rather than switching to Teflon, decide to work on making your cast iron well-seasoned.

According to America’s Test Kitchen, a well-seasoned skillet will have a “dark semi-glossy finish and won’t be sticky or greasy to the touch. It won’t have any dull or dry patches.”

Reason #1: Your pan needs to be reseasoned.

Use the Right Amount of Fat

Okay, this one is true; you have to use enough fat.

But the bread of grilled cheese has butter on it, right? And whether you put a little or a lot shouldn’t matter.

However, I decided to see what would happen if I didn’t add any butter. I put a piece of bread on an unheated skillet.

Guess what? After heating it up, it didn’t stick.

Whereas some foods would stick, it’s not true for a piece of bread. It simply toasted.

But what about using margarine? Margarine has water in it, so it’s maybe a possibility.

I didn’t have any margarine, so I couldn’t test it.

The advantage of margarine is it’s cheaper and easier to spread when refrigerated.

But butter is healthier and can be left out.

In other words, your grilled cheese might stick to your cast iron skillet if you use margarine, especially if it’s on a pan that needs to be seasoned.

Reason #3: You are using margarine on a pan that needs to be reseasoned.

There are only three possible reasons I can see.

Either your pan needs to be reseasoned, or you need to switch to butter if you’re using margarine.

Or it could be a combination of both.

Unfortunately, none of the people who said they had the problem ever came back to say if any suggestions worked.

How I Make My Grilled Cheese

Interestingly, there are many variations in how to make grilled cheese. The video below will show you five unique ways.

So, if you’re looking for a change, check it out.

And hopefully none of them will stick.

So, if you asked, “Why does grilled cheese stick to my cast iron skillet?” you hopefully have some ideas of what the problem is or isn’t.

The kind of bread or cheese you use doesn’t matter, but if you use margarine instead of butter, that might be why.

Cast iron skillets are mainly nonstick when they are well-seasoned. And they definitely should be nonstick enough to make a grilled cheese without having it stick.

So if your grilled cheese is sticking, then it may be time to reseason your pan.

The seasoning is what gives the skillet its nonstick properties. And one nice thing about cast iron is, you can always build on the seasoning to make it better.

If your grilled cheese is sticking, do any of the reasons stated above sound like they might help fix the problem?

Have you ever had a grilled cheese stick to your skillet?

If so, did you ever find out what was causing it, and were you able to fix it?

2 thoughts on “Why Does Grilled Cheese Stick to My Cast Iron Skillet? – 3 Reasons to Consider”