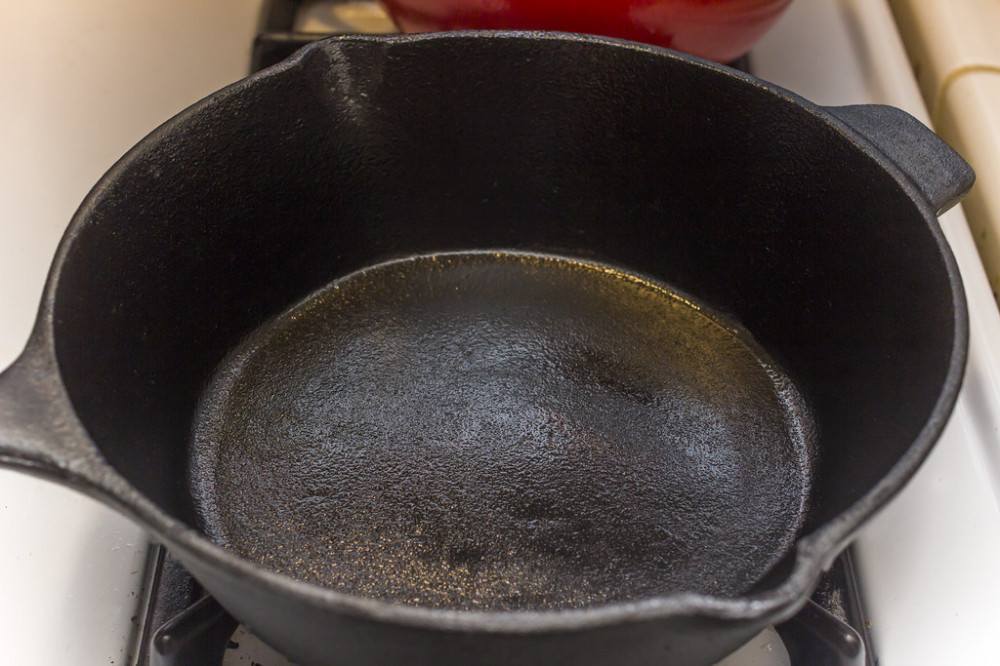 Do you get iron from cooking in cast iron pans, or is it a myth?

Yes, you can get iron from cast iron pans, but whether the amount is significant or not is not clearly answered.

Some say you get a significant amount from cooking in cast iron and site a 1986 study done by the Journal of American Dietetic Association.

But others say it’s a myth, and any iron transmitted is not enough to be beneficial. And they also have a recent experiment to back them up.

So, has anything changed between 1986 and today?

Do You Get Iron from Cast Iron Pans?

You can get a significant amount of iron from an unseasoned cast iron pan. However, once the pan is seasoned, it creates a barrier between the iron and the food. And this means several things, one of which is that less iron will transmit. Today, most people who cook in cast iron use a seasoned pan. Therefore, it’s a myth to claim that cooking in cast iron will give you a significant amount of iron. However, you can still get some, especially if you simmer acidic foods for a longer period.

Approximately 5 years ago, America’s Test Kitchen (ATK) did an experiment to determine if cooking in cast iron gave you a significant source of iron.

It should be noted that acidic foods (for example, tomato sauce) typically are not good for the seasoning in your pan. And if you simmer for an extended period, more iron can leach into the food.

America’s Test Kitchen also performed an experiment using acidic foods (in the same article) that you might want to read.

Since most people cook in seasoned cast iron, you will be hard-pressed to say there is any real benefit from the amount of iron you get from cooking in cast iron.

However, if you only want to know if you get trace amounts of iron from cooking acidic foods in seasoned cast iron, the answer is yes.

Basically, Cast Iron Collector agrees with America’s Test Kitchen and says a well-seasoned pan forms a barrier between the iron and the food. But, if you were to cook in an unseasoned pan, especially foods with moisture and acidity, the iron would transfer to the food. However, cooking in unseasoned cast iron is uncommon.

As you can see, based on recent studies and experiments, cooking in seasoned cast iron is not a good source of iron and should not be considered a benefit.

Additionally, it’s not a good source of iron because the seasoning puts a barrier between the iron and the food. And the better the seasoning, the harder it will be for the iron to leach.

Does Cooking in Cast Iron Help With Iron Deficiency?

In seeking to answer whether cooking in cast iron helps with iron deficiency, University Health News (UHN) cited a review of recently published studies in the journal PLOS ONE.

Apparently, some evidence showed that using iron cookware might reduce iron deficiency in children. Still, the studies determined cast iron wasn’t a reliable way to treat or prevent it.

Note that the word used to describe the cookware is “iron”  and doesn’t specify if it was seasoned or unseasoned.

Regardless of whether the cast iron was seasoned or not, these studies seem to say the amount of iron you get is not enough.

What We Don’t Know From Older Studies

Or course, there is another side to the debate.

As I mentioned in the Introduction, those who claim cast iron is a good way to get iron primarily base it on a 1986 study done by the Journal of American Dietetic Association.

But, in reading about this study, I couldn’t find if the cast iron was seasoned or unseasoned.

The closest I found was on PubMed.gov and the National Library of Medicine about the “iron content of food cooked in iron utensils.” Here is what it said:

As you can see, nowhere does it mention if the iron was seasoned or unseasoned.

Therefore, it’s hard to know if this study agrees or disagrees with the more recent experiment America’s Test Kitchen did.

But wait, there’s one more experiment

Similarly, Runners’ Connect mentions an experiment conducted and written about in a 1991 article in the Journal of Food Science.

Y.J. Cheng and H.C. Brittin wanted to know how much iron is absorbed by two common acidic foods: applesauce and spaghetti sauce.

So, they cooked one hundred batches of each; fifty in cast iron and fifty in corning ware (which has no iron). Cheng and Brittin discovered that the batches cooked in cast iron had a significant source of iron.

Again, nothing is said about the cast iron being seasoned or not.

Is it possible the pans were seasoned in both cases? Sure. However, the results would contradict America’s Test Kitchen experiment.

And if either study/experiment used new skillets, did they season the pans first? Because cast iron didn’t come pre-seasoned in 1986 or 1991.

Lodge was the first in the industry to pre-season cast iron, and they didn’t start until 2002.

But it’s also reasonable to conclude that maybe they used unseasoned cast iron, and that’s why they got different results.

I asked in the introduction if anything had changed between 1986 and today?

You might have guessed by now that it’s factory seasoning that has changed. And maybe the reason the results from the newer experiment is different from the older ones.

And if that’s not enough, watch the video below to hear one more reason why cast iron isn’t the best way to get the iron you need (it’s pretty scientific).

Is a Cast Iron Pan a Good Source of Nutritional Iron?

As you can see, there is a debate about whether cooking in cast iron is a good source of iron.

Both say you get iron but disagree on the amount.

And both sides base their answer on studies or experiments.

But only one side experimented with both seasoned and unseasoned cast iron pans.

The other side didn’t specify.

Although I conclude that cooking in seasoned cast iron is not a good source of iron, you may look at the evidence and come to a different conclusion.

I think seasoning is a barrier that keeps the iron from leaching into your food. And the more the seasoning builds up, the more difficult it will be for the iron to get through. However, you can still get a trace amount from cooking acidic foods.