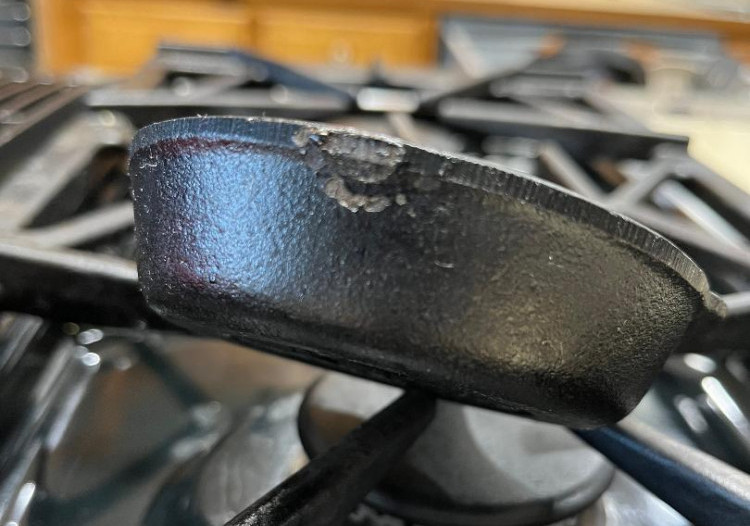 Do you have a new cast iron skillet with an unfinished spot that looks like it wasn’t seasoned?

Fortunately, your pan isn’t defective, and the spot is perfectly safe.

Why Does My New Lodge Cast Iron Skillet Have an Unfinished Spot?

Many cast iron pans in the foundry are seasoned on a hanging conveyor. During the process, a tiny spot might appear that looks unseasoned. Generally, it will be around the edge or on the support handle where the skillet hung. The pan is still seasoned, and the spot isn’t rust. Typically, it’s simply a small area where the oil didn’t fully carbonize. Over time, the spot will disappear as you use your pan regularly.

It Happens During the Factory Seasoning Process

There are multiple steps in making cast iron, and seasoning is just one of the steps.

Watching the video below showed me quite a bit about their seasoning process.

Before the pans are seasoned, they are hung on a conveyor and put through a hot rinse and hot air blow-off to remove any remaining water and soap. This step makes the pans more receptive to seasoning.

Next, each pan is sprayed with vegetable oil and sent to the oven. They bake them at a high temperature, much hotter than the typical household oven can get.

Finally, the pans go through a cooling room to make them safe to handle for the final packaging step.

The oven is where you might get a spot on the pan. Although the video doesn’t address it, their website does.

Lodge says, “We season our oil on a hanging conveyor, which sometimes causes a small spot or bubble to form around the edge of the skillet or on the support handle where the skillet is hung.”

They go on to say, “This variation might chip away, revealing a brown color.” This brown-colored spot is what you will see in the store or when it arrives at your home.

Additionally, Lodge assures you it’s nothing to worry about. “This isn’t rust, and it’s perfectly safe–it’s simply oil that has not fully carbonized. With regular care and use, this spot will disappear.”

Another way to look at the spot is to see that it adds character to your pan and makes it unique.

Plus, “It’s a testament to cast iron’s ability to roll with the punches and get better with age.”

The spot on my pan

I currently have eight Lodge cast iron pans, and two of them have unfinished-looking spots on them. Both are on my two smallest ones (3.5-inch).

I had no idea what they were and assumed they were spots that didn’t get seasoned.

And since none of my bigger skillets had any, I figured it was just more difficult to fully season the tiny pans.

It didn’t bother me, but I am still glad to know what they are and how they got there.

You now know what the spot is and that it appeared during the seasoning process. But what exactly is seasoning, and why is it necessary?

What is the Science of Cast Iron Seasoning?

Simply put, seasoning is the hardened oil that’s baked onto your pan and protects your cast iron from rust. Additionally, seasoning makes your skillet more nonstick.

When oil is heated at a high temperature, it goes from a wet liquid to a hard plastic-like substance. And the oil literally bonds to the iron and carbonizes.

Since cast iron itself is rather bumpy and uneven, the oil can better adhere to the pan.

Initially, a pan will be bumpy because it only has the factory pre-seasoning. However, as you cook in your pan or season it in the oven, the layers build up and fill in the textured surface.

Over time, you can get a smooth surface that is naturally nonstick.

The Best Way to Season Your Pan is By Cooking

Lodge says the best way to season your pan is to cook in it. Because each time you cook with oil or fat, you add another layer of seasoning.

That doesn’t mean all the oil you cook with will bond, but some of it will.

And with a new pan, the layers will look uneven and patchy, but that’s okay. It’s all part of the seasoning process. Over time it will even out and fill in the lower areas, making it smooth.

However, you may still want to occasionally season your pan in the oven.

For example, your seasoning might get damaged a bit if you cook something acidic, especially if your pan is new.

Or, let’s say the food residue sticks, and in the process of cleaning it, you mess up the seasoning a little.

It happens, and it’s not a big deal, but your pan may need to be seasoned in the oven to get it back on track.

In fact, some people prefer to season their pan in the oven as soon as they get it. Not because it’s necessary, but because they want to move the process along a little quicker. Getting a smooth surface is their primary goal.

Others don’t ever season their pan in the oven, preferring to let the smooth surface happen over time.

Either way is acceptable and a matter of preference.

So, as you can see, a brown spot on a new Lodge cast iron skillet doesn’t mean it’s unfinished, rusty, or defective.

It’s simply something that may happen during the factory seasoning process, and it should disappear as you use your pan.

The spot is still seasoned but didn’t carbonize all the way, giving it an unfinished look.

Lodge says it’s part of the charm and what makes your pan unique.

So, just keep cooking in it!

And remember, not every Lodge pan comes with a spot. I don’t even think it’s the norm.

The first five skillets I bought didn’t have an unfinished-looking spot, nor did my wok. Not until I purchased the tiny 3.5-inch pans did I come across any.

I say that because I don’t want you to expect every new Lodge pan to have one of these spots.

With that being said, maybe you are in the market for another skillet but aren’t sure what size you want. Check out my post on Lodge’s most popular sizes.

Which Size Cast Iron Skillet Should I Get? – 5 Pans to Consider