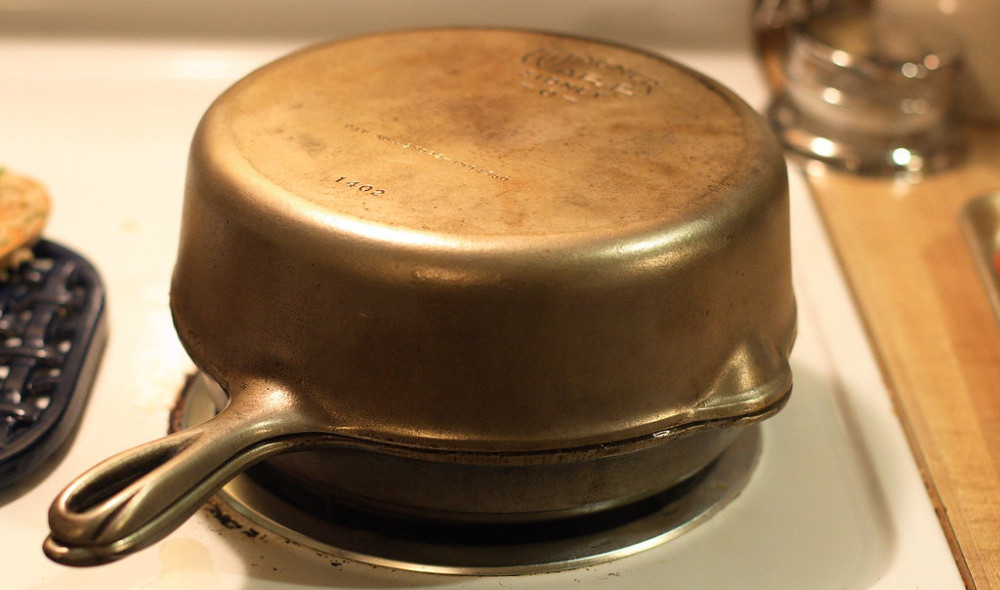 Perhaps you have started collecting vintage cast iron, and you have questions.

Or maybe you already have a piece, and you want to know more about it and if it is indeed vintage.

Even if you simply want to buy an antique skillet for personal use, you may want to see what you’re getting.

Collector or not, one question you have is, “How can I identify vintage cast iron?”

Knowing what to look for is an excellent place to start.

How Can I Identify Vintage Cast Iron?

Vintage cast iron has several tell-tale signs. If you see a trademark or logo, you are probably looking at pans made before 1960. Other things to look for are numbers and letters or ghost marks. However, not all antique cast iron is marked, so you may be looking at vintage without knowing it. But keep in mind that a “Made in the USA” stamp does not mean it’s vintage since this wasn’t added until automated manufacturing became the norm in the 1960s.

1. A Stamped Trademark or Logo

Looking for the trademark or logo is by far the most common way people identify vintage cast iron.

Most markings are found on the bottom of the pan.

It may simply have the name of the city where it was manufactured. For example, a Griswold will have “Erie” etched on the bottom of the skillet if made from 1880 to 1910.

Or you may find the manufacturer’s name, such as “WAGNER,” in block letters if cast in the 1890s.

One manufacturer might have a dozen different logos or trademarks because they changed them throughout the years.

Interestingly, the two most sought-after brands are Wagner and Griswold, possibly because more of them were made or at least more variety.

By the early 1900s, Griswold, Wagner, and Lodge dominated the market. However, today only Lodge remains.

Below is a list of the leading American cast iron manufacturers founded in the late 1800s and early 1900s. Most vintage you see today is American-made, but not all.

Go to Notable US Manufacturers for a more extensive list of vintage cookware from each manufacturer. Click on an item to see a picture with its trademark, logo, or other markings.

Almost all vintage cast iron will have a number regardless of other markings. And the numbers are typically found on the handle or the bottom of the pan.

Often, people think the number represents the size of the skillet, but that’s not the case.

In the past, when cooking on wood stoves was the norm, the stove had what is called “stove-eyes.” They were much like burners on our stoves today, except stove eyes had sizes. The number told you what size stove eye the skillet would fit.

Sometimes vintage has numbers with letters, or the number or letter might be raised. And other times, the pan will have alphanumeric markings such as “10 5/8 IN” or “6 1/2 Inch Skillet.”

Click on Numbers and Letters to learn more about what they mean.

Once in a while, you’ll come across a cast iron pan that has a marking, but it’s very faint. If the rest of the pan looks to be in good condition, it’s probably a ghost mark.

Sometimes, the foundry would decide to change their markings. Instead of making a new mold, they would fill in the pattern on the old one and add new markings.

Over time, the old filled-in marking would begin to erode and make a faint “ghost” mark.

If quality control didn’t catch it, it would be shipped as-is.

And that’s why we still have vintage cast iron with ghost marks today.

To learn more about ghost marks, see Ghosts in the Machine.

Many foundries made unmarked cast iron pieces to sell at a lower price.

This practice was typical for companies such as Sears Roebuck and Montgomery Ward, and other hardware, department, and building supply stores.

Interestingly, the quality of the pans was the same.

So, even though most unmarked vintage skillets aren’t good collector items, they are still great for personal use. And you can usually find them at a much lower cost.

One such brand is Birmingham Stove and Range (BSR), which seems primarily to have unmarked skillets.

It should also be noted that no marked Blacklock skillets (from the original Lodge foundry that burned down in 1910) are known to exist. However, collectors have speculated over unmarked skillets that could possibly be Blacklock.

Recently, though, Lodge came out with a new Blacklock line of cast iron that more closely resembles vintage cast iron, with a thinner casting, lighter weight, and Blacklock logo.

Another point of interest about Lodge is that their skillets were unmarked from the 1930s until 1973, when they created the iconic egg logo that they still use today.

When you see a skillet with a “Made in the USA” stamp, it was made after 1960 and is not considered vintage.

This stamp was implemented after automation. And was meant to set US-made cast iron pieces apart from products made in Asia or Europe.

But first, let’s back up a bit. Foreign-made cast iron products were creeping into the US in the late 1950s and were decidedly less expensive.  American companies largely moved to automation and identifying their pieces with this stamp to stay competitive.

As you can see, vintage cast iron can be identified in many ways:

There is a lot of information if you want to know more about your vintage pieces. However, if you are only asking how to identify it as vintage, these five ways should help you get started.

One final note about vintage cast iron: although Wagner and Griswold are the most sought after, don’t be afraid to seek out other brands.