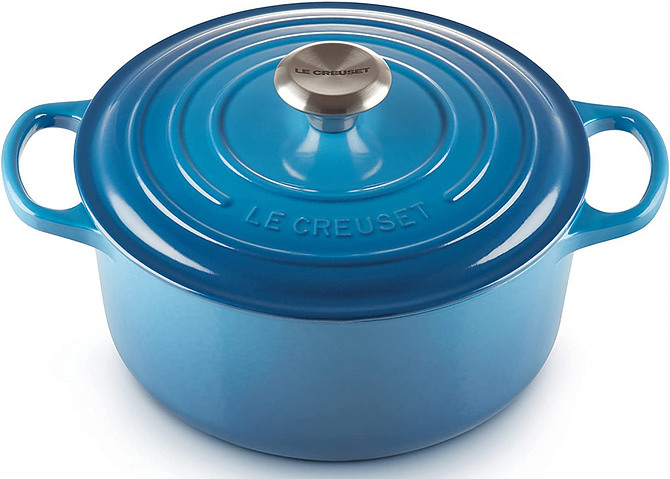 Have you heard of Le Creuset but don’t know much about them other than they are a famous cast iron brand?

They have been making enameled cast iron from the beginning but have expanded into many more products.

Bright colors set them apart from their competitors and are one of the things they are well-known for today.

So, who is Le Creuset?

Who is Le Creuset?

Le Creuset is an international French company that began with the desire to bring color to cast iron cookware. Almost 100 years later, color is still significant to them. However, it’s not the only thing they are known for today. Although enameled Dutch ovens (also called a Cocotte) are still their most popular item, they also make many other types of cookware in different materials, as well as kitchen tools and tabletop products.

Le Creuset’s history began in 1925 when two Belgium artisans opened a small foundry in Fresnoy-le-Grand, Aines, France. They still do all their manufacturing at the same foundry.

Armand Desaeghar, a metal casting expert, and Octave Aubecq, an enamel specialist, met at the Brussels fair in 1924. They both had a dream to bring color to cookware.

The first piece they made was a bright orange-colored Cocotte (enameled Dutch oven). Today, the Cocotte is still their most popular piece. However, it comes in many more sizes and colors now.

Le Creuset took a hit during the war as they were near the front lines and occupied by German forces. But once the war was over, they went to work innovating and developing new products.

They began exporting their cookware in 1952, and things continued moving forward. They modernized their foundry, replacing the manual casting workshop with semi-automatic machines.

In 1974, Le Creuset opened a branch in South Carolina, USA, which was the start of going international.

Furthermore, the US ran a publicity campaign, “Every good cook should know a little French: Le Creuset,” in 1980. This campaign was a huge success for Le Creuset.

Today, Le Creuset is a trusted international brand in over 60 countries.

Moreover, Paul Van Zuydam, a South African, bought Le Creuset in 1988, and he is the company’s current president.

Le Creuset has grown from the enamel cast iron Cocotte to skillets and hundreds of other products.

They now have more than 65 colors and make products in stoneware, stainless steel, and nonstick materials.

Le Creuset’s most popular item is still the Cocotte (or Dutch oven). But they now make kettles, skillets, silicone products, bakeware, and much more.

For example, they now offer five types of Dutch ovens in multiple sizes. See Which Dutch Oven is Right for You? to learn more.

Le Creuset is on the more expensive side, but when asked what the advantage of getting a Le Creuset over a less expensive brand is, they say:

“Since 1925, Le Creuset has been the market leader outperforming every competitor in design, performance, and customer devotion. As the first in colorful cookware, the finest in quality and design, and the favorite for generations, we’re honored to share in the meals, memories, and traditions made by food lovers around the world.”

Because they still handcraft each piece, it is going to cost more. Plus, the glass coating is an added expense.

On the other hand, you know you are getting quality cast iron. Le Creuset says that each piece passes through the hands of at least fifteen artisans.

Additionally, Le Creuset’s enameled cast iron products have a limited lifetime warranty. However, other products may have a different warranty.

You can visit the Le Creuset website to see all the products they offer or check out Amazon to find out their many choices.

Or watch Marseille’s review of a Le Creuset enameled cast iron skillet in the video below.

How Are Enameled and Regular Cast Iron Different?

Both types of pans are cast iron. However, enameled has a glass coating added to it which adds color and protects the pan from rusting. Here are a few of the benefits:

However, Le Creuset says it’s better not to use metal spatulas because the enamel is susceptible to chipping. And in that way, enameled cast iron is not as durable as regular.

Sure, regular cast iron can rust. But rust doesn’t permanently damage cast iron. You can remove the rust and start over.

But once the glass coating is chipped or scratched, you can’t fix it. You can either replace the pan or keep using it. If the chip isn’t on the cooking surface, it shouldn’t be a problem (other than the way it looks).

In reading some forums, I found that many people continued to use their chipped pans, especially if the chip wasn’t on the cooking surface.

See Le Creuset’s Care and Use page for more tips.

As you can see, enameled and regular cast iron is not the same. Enamel protects the pan from rust but is prone to chipping if bumped or not handled carefully.

Who is Le Creuset?

It is a trusted brand of colorful enameled cast iron. It’s been around for almost a hundred years and is still going strong.

And that’s not all. Le Creuset makes bakeware, kettles, accessories, dinnerware, cutlery, and other kitchen and tabletop products.

However, this brand is not in everyone’s price range. And though there is less expensive enameled cast iron out there, you will not be getting the reputation nor the quality that comes with Le Creuset.

What are your thoughts about Le Creuset?