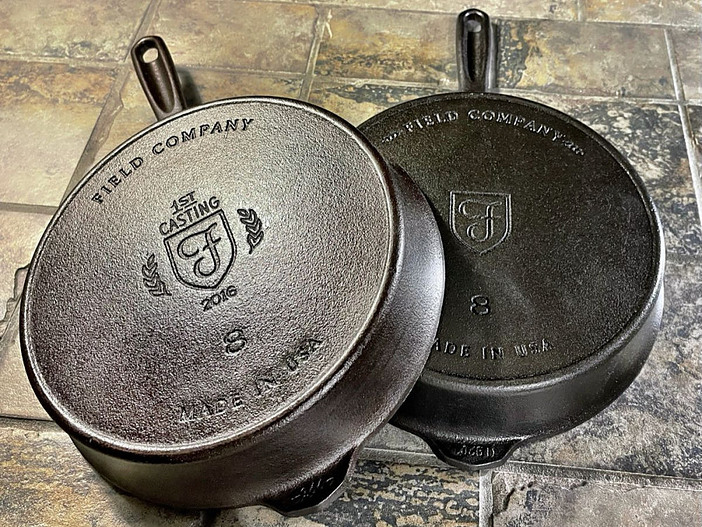 Who is Field Company? They say:

“We take things that used to be made well, or are simply no longer made, and then we make them again, with improvements and modification as needed, the way we believe they should be made.”

What are some of the better qualities of vintage cast iron? Its thinner casting and lighter weight, in addition to being smooth.

Is that what Field Company is duplicating?

Who is Field Company?

Field company is a cast iron manufacturer in the USA started in 2016 by two brothers. Chris and Stephen Muscarella wanted to bring back the best qualities of vintage cast iron: a lighter, smoother pan. Field Company is a small family business that focuses on making a few quality cast iron skillets, lids, a Dutch oven, and a griddle.

Field Company exists today because two brothers, Chris and Stephen Muscarella, wanted to know why they stopped making cast iron the way they use to make it.

When the brothers inherited several cast iron skillets from the 1930s, they fell in love with them.

So, they set out to find out as much as they could about vintage cast iron and how it had been made.

At one point, they took one of their favorite Wagner skillets to various foundries and each place told him the same thing: we can’t cast it that thin.

However, the brothers didn’t give up.

As Chris and Stephen kept searching, they came across a white paper (proposal) written by a material science professor in Europe.

They contacted the professor and were excited when he agreed to help them. The brothers were even able to go to his lab to learn how to make castings by hand.

The brothers ran a Kickstarter campaign in 2016 and raised $1.6 million, saying their No. 8 skillet weighed less than the competition.

And the rest is history.

The First Casting skillets have “First Casting” imprinted on the bottom along with the year.

Today, Field Company offers five sizes of cast iron skillets, matching lids for all but the smallest No. 4, a Dutch oven, and a griddle, their newest addition.

Meet the brothers in the video below.

I am a participant in the Amazon Services LLC Associates Program. If you make a purchase using the affiliate links below, I receive a small commission.

Field Company’s cast iron products are all manufactured and fulfilled in Illinois, Indiana, and Wisconsin. And its headquarters are in New York City.

Additionally, Field Company has cast iron lids for each skillet except No. 4. The skillets and lids can be purchased separately or together as a set.

Or you can get other cookware sets.

Cast iron is the only cookware they make. However, they also offer several accessories and gift items.

And I was pleasantly surprised to see even the accessories and gift items are made in the USA or countries such as Germany, France, and Lithuania.

What Sets Them Apart

If you clicked on any of the links, you could see that their cookware is expensive.

So, what makes Field Company cast iron better than their less expensive competitors?

Truthfully, the pan’s performance is pretty much the same as less expensive cast iron. What you are paying for is the design, details, and experience:

Field Company says that their cast iron pans are “the closest living relatives to vintage” and “The only pan you need, in every size you want.”

They have an interesting FAQ page in their care and seasoning section.

For example, they encourage you to lightly scour your pan with a chainmail scrubber each time you clean it. You want to “rough it up” a little so the seasoning will adhere better.

That’s one downside to smooth machined cast iron; it can be harder to build up the seasoning on your pan. But, if you use chainmail to give the surface a bit of texture, it will be easier.

Chainmail removes what you don’t want to be left on the pan and leaves the polymerized oil alone.

So, who is Field Company?

It’s a small cast iron company that makes quality cast iron pans more like they used to make them.

They hand-pour and machine their cast iron so it weighs less and is smoother.

Of course, they’ve improved on the past with their innovative design.

If you are looking for an alternative to heavy, textured cast iron, and you have the means, Field Company may have just what you need.