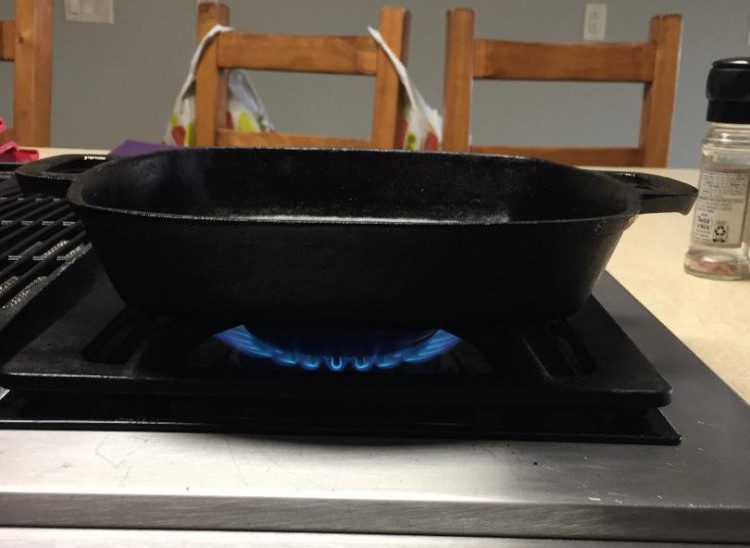 Are you ready for a science lesson?

Because if you are asking, “What happens when you heat cast iron?” the answer is found in science.

In some ways, iron is similar to other types of metal, but in other ways, it is quite different.

Furthermore, when trying to understand what happens when you heat cast iron, it’s helpful to compare it to other types of metal cooking materials.

What Happens When You Heat Cast Iron?

Several things happen when you heat your cast iron skillet. The first thing to know is that the iron expands because the atoms moving around take up more room than when they are in one place. Next, cast iron takes a long time to heat up, but once it gets hot, it stays hot. However, don’t expect it to heat evenly. You can minimize the hotspots by heating your pan slowly on the stovetop. But the only way to get even heating is to heat your pan in the oven.

All metal expands, but some more than others.

Additionally, all materials are made up of atoms, and anytime the temperature is above absolute zero, the atoms are moving.

When the material is in

However, when you add heat to the mix, the kinetic energy increases and causes the atoms to move more.

Atoms that are moving around take up more space than ones vibrating in place.

Cast iron is no exception. However, the forces between the atoms are stronger in iron meaning they don’t move around as much as with some other metals.

In other words, iron expands less. Yet, it still does expand.

And one downside of metal expanding is its tendency to warp when it isn’t heated or cooled properly.

Therefore, it’s wise to heat your skillet slowly or in the oven.

2. The Pan Heats Slowly and Unevenly

Compared to other metals, such as aluminum or carbon steel, cast iron takes longer to heat.

Partly because cast iron is thicker, and there is more to heat.

On top of that, You’re told to heat your pan slowly.

So, that’s why you might hear you’re supposed to heat your skillet for 8-10 minutes on medium-low heat.

The first area to get hot is wherever the fire from the burner touches the pan. That’s if you are using gas.

It’s even more tricky if using a glass top or an electric coil stove because there is no air between the pan and the heat source.

The heat then travels slowly to the edge. But even as it reaches the border, the middle remains hotter.

If you have heard that cast iron heats evenly, that’s a myth.

Unless you put it in the oven.

However, preheating your pan in the oven is inconvenient if the food you’re making is on the stovetop.

Inconvenient or not, it’s still the best way to heat your pan evenly.

Nevertheless, by heating it slowly on the stovetop, you can minimize the hot spots and have a more even cooking surface.

Heat travels quickly across aluminum, so the heated surface will be more even.

The Science of Heat Conduction in Aluminum and Cast Iron

3. The Skillet Retains Its Heat Well

The great thing about cast iron is once it’s hot, it stays that way.

It’s one of the reasons why people like cast iron despite having to heat it slowly.

Of course, there are other reasons too. But heat retention is one of its most significant benefits.

Interestingly, cast iron will hold on to its heat longer than most any other type of cookware.

And there is little danger of heating an empty, dry cast iron skillet.

Once again, I will compare cast iron with aluminum and also copper.

Cast iron has a higher heat capacity than copper.

On the other hand, aluminum has a higher heat capacity than cast iron and also stores more heat per pound.

The difference is that aluminum weighs less and is thinner. Never will you find an aluminum pan that weighs as much as a cast iron pan of the same size.

I’ve read several times about experiments using flour to show where the hotspots on pans are. So, I decided to do my own.

I used two pans roughly the same size. One was cast iron, and the other was My Copper Chef aluminum pan.

I covered the bottom of each with 1/4 cup of flour.

Then I heated them both over medium heat. Unfortunately, the aluminum pan didn’t fit on the burner quite in the middle, which explains why there is more white in the left corner.

However, it’s evident that the aluminum heated more evenly and had fewer hot spots.

The outer edges are primarily white when you look at the cast iron pan, with only one place turning darker. And one area burned. I had to turn off the aluminum pan first.But that makes sense since it heats faster.

Overall, this test convinces me that science is right once again.

There you have it!

What happens when you heat cast iron?

Hopefully, you now have a better understanding of what’s happening when you turn that burner on under your pan.

First, the iron is expanding. All materials grow, including cast iron when exposed to heat.

Second, cast iron takes a long time to heat up. On top of that, you’re told to heat it slowly to minimize hot spots and give it time to heat more evenly. Of course, if you preheat your skillet in the oven, you can avoid these problems altogether.

Third, your skillet will retain heat better than any other type of metal cookware. It’s mainly due to its thickness combined with heat capacity.

What are your thoughts on the things that happen when you heat cast iron? Do you have any more to add? Or a difference of opinion? Share them in the comments below.