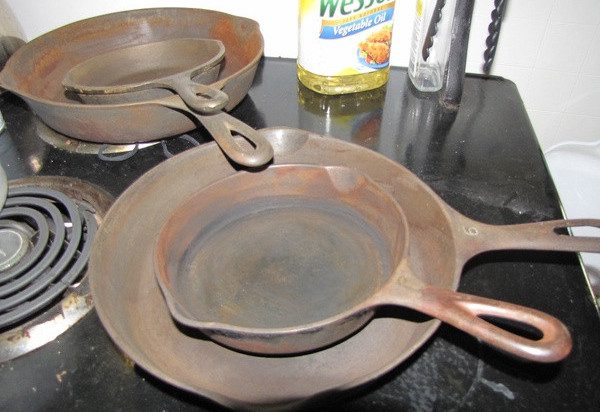 A common question people ask is, “Is it worth it to restore a rusty cast iron pan?”

It’s hard to say, mainly if the pan is badly rusted.

Whether it was left outside in the rain or you found it cheap at a garage sale, a rusted pan will need some work.

It will take time and effort.

Only you can answer that question.

But by answering a few other questions first, you’ll be in a better position to make an informed decision.

And if you decide it’s worth it, you may want to know how to go about restoring your pan.

So, let’s first look at the questions you need to ask and then three methods you could try.

Is It Worth It to Restore a Rusty Cast Iron Pan?

It depends. First, you need to answer a few questions: 1 – Does it have any other issues such as pitting, warping, chipping, or cracking? 2 – Is there sentimental value, or is it a modern-day cast iron skillet that can be easily replaced? 3 – How much time and effort am I willing to invest? It can be easily restored if it just has surface rust and is otherwise in good shape. And if your pan has sentimental value, or you enjoy restoring cast iron, it is probably worth it.

Does the Pan Have Any Chipping, Cracking, Pitting, or Warping?

If you left your cast iron pan out in the rain overnight, it most likely only has rust.

However, if you found an old cast iron pan for a bargain at a flea market, there may be several things wrong with it. Some are easily detectable, and someare not so easy.

Rust and dirt and built-up residue might make the pan look bad, but those things can be cleaned. They may also hide other problems, especially pitting. And the other issues can be more concerning than rust and will affect not only the way your pan looks but also the way your food cooks.

Cracks may or may not be easily detectable, and a chip should easily be spotted. Both chips and cracks are cosmetic and don’t necessarily affect the pan’s functionality.

One reason is that most cracks are merely hairline fractures along the sidewalls. And chips are usually along the lip of the pan.

Pitting is most likely to happen when the rust is left unchecked. Rust can eat away at the iron, and once it does that, the iron can’t be replaced. However, with time, the pitting can be filled in with seasoning.

A warped pan can also be called a spinner because when you set it on a flat surface and push the handle, it begins to spin. In other words, the pan doesn’t sit flat. Additionally, if the pan rocks or wobbles, it is warped. Warping is more of a problem because it affects how your food will cook.

If your goal is to get rid of the rust and use the pan, then warping is the only thing that might make the pan unusable. But a little warping might still be okay. I have a warped (wobbly) pan that I use with minimal problems.

Is There Sentimental Value or Can It Easily Be Replaced?

A modern-day cast iron pan can be easily replaced, but your grandmother’s skillet can’t.

Neither can a vintage Wagners or Griswold.

I only have modern-day cast iron skillets, most of them from Lodge. All my skillets would fall in the category of easy to replace.

Since restoring a heavily rusted cast iron pan will invariably mean you have to start your seasoning from scratch, the seasoning is not really a factor.

In fact, any rust will affect the seasoning. However, if you don’t strip it entirely during restoration, you might still have some seasoning left.

How Much Time, Effort, and Expense Am I Willing to Invest?

Restoring cast iron doesn’t have to take a ton of time and effort, and it won’t necessarily cost a lot.

It all depends on the condition of the pan and what method you want to use.

Since I’ve not restored any cast iron, I can’t speak from experience.

However, I’ve read about people spending anywhere from a few hours scrubbing the rust off to others leaving their pan in the electrolysis tank for 48 hours.

Obviously, scrubbing takes more work than soaking, but any restoration will take some effort.

Building your own electrolysis tank can be inexpensive if you use what you have around the house, but making it will take time and effort.

I watched some videos of pretty fancy tanks being built too.

All that to say, consider how much time and effort you’re willing to give to restoring your pan. Think about what it will cost. Is it still worth it? Or does the idea of buying another pan sound more appealing?

RELATED > > > > > Why Strip the Seasoning From My Cast Iron Skillet? – 3 Reasons to Consider

This method is the place to start unless your pan is in terrible shape.

It’s also what Lodge recommends. There are five steps:

Scour the rusty areas of the pan with steel wool or with a Lodge Rust Eraser. This may take a bit of time, depending on how much rust you need to remove. Another way would be to scour with salt with half a potato instead of steel wool.

Dry thoroughly with a lint-free towel or over a burner.

Apply a thin layer of oil to the entire pan using a paper towel or lint-free cloth. After applying, re-wipe the pan, so it looks like the oil is gone. This will keep the seasoned pan from being sticky.

Season your pan in the oven for one hour at 450-500°F. Make sure the oven is as hot or hotter than the smoke point of the oil you’re using. The idea is for the oil to polymerize or bond to the pan’s surface. This can only happen if the oil reaches its smoke point.

2. Give Your Pan a Vinegar Bath

If you have a single pan that is heavily rusted, this is the method I would start with.

Not because I’ve tried it, though. I would begin here because it seems like it would be the simplest and least expensive. And a heavily rusted pan would take hours to scrub clean.

Some people say vinegar doesn’t get off all the rust, though. In that case, you may have to finish with the scour, wash, and season method.

At the very least, the vinegar would remove some of the rust.

Here are the steps for giving your rusted pan a vinegar bathe:

Warning: the vinegar will eat away at the iron if left to soak too long or after the rust has dissolved. If, after 8 hours, there is still rust in areas, follow the instruction for #1 Scour, Wash, and Season.

What I like about a vinegar bath is it can be done in a sink, and when you’re finished, you have nothing to store or take up space.

However, if you enjoy restoring old cast iron pans, and will continue doing more in the future, the electrolysis method might be worth considering.

The electrolysis method is generally used for a heavily rusted pan.

Or for those who routinely restore cast iron.

After you have made the tank, the process is pretty straightforward.

However, there may be some initial costs involved.

The video below shows one way to build a tank for minimal cost. If I ever decide to make a tank, this is the video I will probably use because it’s simple and easy to understand.

I suggest you watch the video if you want to make your own electrolysis tank, but I will also try to describe it.

Like with the other two methods above, you will want to wash, dry, apply oil, and season the pan in the oven.

You are then ready to use your pan.

Like I said earlier, I would probably use this video to help me build an electrolysis tank should I ever need one.

I might do a couple of things differently, though, based on some other research and the comments made below the video.

For example, I probably wouldn’t use copper wire since several people pointed out it is also toxic.

Also, a couple of people talked about how to make an automatic battery charger work. This could be helpful to know since manual battery chargers are harder to come by from what I read.

I might use rebar and place it evenly around the tank because we already have it. Several people mentioned that’s what they did.

I highly suggest you watch the video if you are thinking about making a simple electrolysis tank (rather than relying on my description).

Should I Ever Throw Away a Rusted Cast Iron Pan?

Based on my research, there are only two reasons I can see to throw away a rusted cast iron pan:

So, is it worth it to restore a rusty cast iron pan?

Hopefully, you are better able to answer that question now.

By answering some other questions, you can decide if it’s worth it for you.

In most cases, a rusty cast iron pan is worth restoring as long as you are willing to do the work.

It might be as easy as spending an hour or less scouring the rust off and then washing and reseasoning. Or it might take a little longer because it needs to soak in an active solution (vinegar and water) or an electrolysis tank using a battery charger.

In some cases, you might not think it is worth restoring. Usually, that’s because replacing it is easier and more cost-effective.

For others who enjoy restoring cast iron cookware, it’s almost always worth fixing it.

What kind of rusty cast iron pan would you restore?

And what kind would you replace instead?

Let me know your thoughts in the comments below.