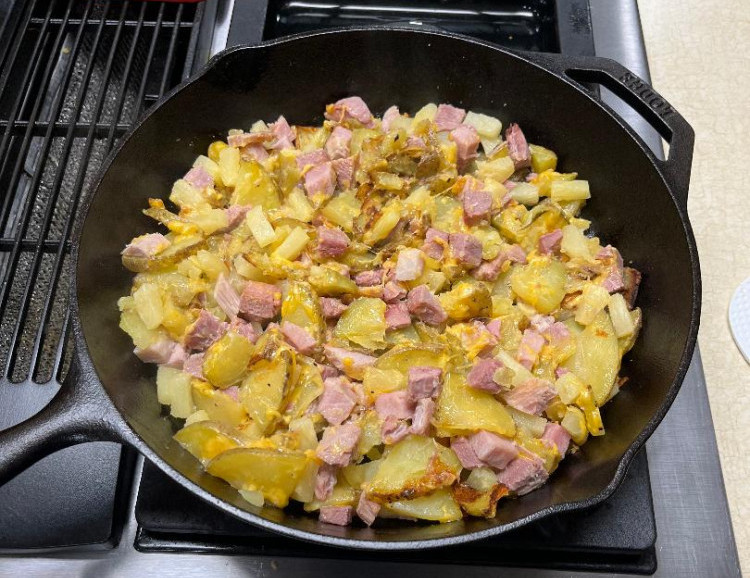 Are you looking for a meal you can make in your cast iron skillet?

It’s simple to make and tastes delicious. And there are only a few ingredients.

Total prep and cooking time is less than an hour.

Your prep time will be 10-15 minutes to break it down further, and your cooking time 40-45 minutes. And some of the prep time can be done while the potatoes are cooking.

However, if you make anything to go with it, you may need to add a few extra minutes.

So, let’s find out how to make this skillet meal.

This easy recipe calls for potatoes, ham, and cheese. Pineapple is an optional ingredient that will add flavor (and fruit). A little oil, salt, and pepper, and you are set. It makes 3-4 servings, but the recipe can be easily cut in half if desired. However, if you half the recipe, you will only need a 10-inch skillet. Unquestionably, Cheesy Skillet Potatoes and Ham is a skillet meal worth trying.

This recipe is my own version of the one made in the video above, but Tos Tin Man was my inspiration.

I made the recipe as written, but I want to explain it in more detail.

Ham – I had leftover ham that I cubed. And I recommend a ham steak if you don’t have any leftover, rather than lunch meat.

Cheese – Although the recipe calls for shredded cheddar, you can use whatever cheese you like. You can even add a bit more if you want it to be cheesier.

Pineapple – I started adding pineapple at my husband’s suggestion. I love the flavor it adds. I only had chunks, so I cut each one in fourths and laid them on a paper towel to get rid of as much liquid as possible. I don’t know if it’s necessary, but moisture in the food can affect the crispiness when cooking at high temperatures.

Salt and Pepper – This is pretty self-explanatory, but feel free to use additional or other spices. I sometimes use Johnny’s Seasoned Pepper in place of the pepper. If you’d like to know about this seasoning, check out my review below.

Oil – I used Avocado, but any oil will work. Keep in mind that some aren’t flavor neutral and will change the taste.

Tip: If you would like your cheesy ham and potatoes a bit more browned on top, just put it under the broiler for a couple of minutes at the end. I think I will try this next time.

Regardless of whether you finish under the broiler or not, your oil-coated potatoes will be crispy and browned on the bottom from cooking in cast iron.

Because of time, I didn’t make anything else, but sometimes I cook a vegetable with the meal, such as broccoli.

I hope you found the Easy Cheesy Skillet Ham and Potatoes Recipe one you would like to try.

You only need a few ingredients and an hour. There’s not much prep, but there is some.

Between cutting potatoes and ham (maybe pineapple), you’ll need no more than 15 minutes. And the baking will be done within 45 minutes.

Similarly, you can make this skillet meal with different cheeses or spices to change up the flavors. You can make it with or without pineapple. Or you might find a new ingredient to add.

For example, you might carmelize some onions or throw in a few mushrooms. Maybe add a little parsley for color.

What new ingredient or spice would you add?