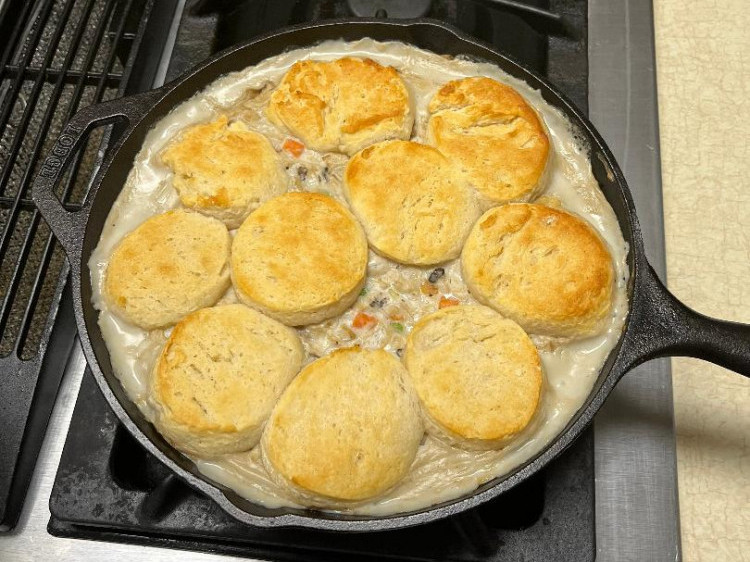 Are you looking for something simple you can make in your cast iron?

You won’t need a lot of ingredients, nor does it require much prep work.

Since it’s a one-pan meal with meat, vegetables, and biscuits, you don’t have to make anything else.

This recipe is indeed easy and delicious. You will need cream of mushroom soup, chicken breast, frozen mixed vegetables, salt and pepper, and a small can of biscuits. Prep time is 5 minutes or less (to cut up the chicken), and baking time is 40 minutes for a total of 45 minutes to make this skillet meal.

This recipe can be a template, meaning you can substitute one ingredient for another to make a different skillet meal. For example:

When a recipe becomes a template, you can make various meals instead of just one. In other words, you can create different flavors, and it will seem like a new dish even if some of the ingredients remain the same.

Maybe you’re looking for a dessert to complete the meal. How about skillet cookies? With a scoop of ice cream?

For a similar, but a little more complex recipe, see the video below.

How I Made It

I made it according to the recipe with one adjustment.

Since I didn’t have any chicken breast, I used three leftover thighs that I had already cooked. It equaled about 2 cups.

I also basted butter on top of the biscuits before putting them in the oven. And I left them in 15 minutes, instead of 10. The extra 5 minutes allowed the tops to get golden-brown.

10 Interesting and Fun Facts About Chicken

Here are a few facts about one of our favorite foods to eat. No matter where you live in the world, you probably either eat chicken or know someone who does.

1. Over 65 billion chickens are consumed every year. It’s the second most-consumed protein, second only to pork.

3. It’s estimated that 55 million chickens are eaten around the world daily.

4. There are nearly 24 billion chickens in the world at any given time.

5. Chickens have a great memory. They can learn their own name and recognize the faces of people and even other chickens and animals.

6. In Gainesville, Georgia, it’s illegal to eat fried chicken with anything but your fingers. Apparently, 91-year old Louisiana resident, Ginny Dietrick, was caught eating her fried chicken with a fork in the Longstreet Cafe. The Gainesville police chief spotted her and informed her she was being arrested for breaking the law.

9. Chicken wing sales at the grocery store totaled more than 3 billion dollars over the 2020 Superbowl weekend.

10. The National Chicken Council has kept records of the per capita consumption of poultry and livestock from 1965 to forecast 2022, in pounds. Chicken has by far risen the most, while beef has decreased.

An easy skillet chicken and biscuits recipe, and some ways to make other skillet meals using the recipe as a template.

And I finished with some interesting and fun facts about chicken.

Did you have any idea people ate that much chicken or that it’s right behind pork in consumption?

Or how many chicken wings that people consume every Superbowl?

I wonder how many will make their chicken wings in cast iron?