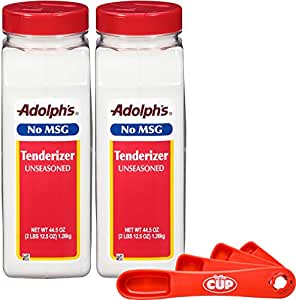 Are you looking for a way to tenderize your meat but aren’t sure what to use?

Do you want something simple and effective?

Tenderizing is always a good thing to do, especially if the meat is on the tougher side. There are several ways you can do it.

And one of those ways is to use a tenderizing powder such as Adolph’s.

But does it work?

What Is Adolph’s Unseasoned Tenderizer

Adolph’s Unseasoned Tenderizer is a meat tenderizer in powder form. In other words, it makes your meat more tender. It does this through an active ingredient called Bromelain. Bromelain is an enzyme extracted from the fruit or stem of pineapple and starts working immediately upon contact. Adolph’s Unseasoned Tenderizer contains no MSG, artificial colors, or flavor. It is completely natural.

A Little About the Company

McCormick is a global brand, and in any supermarket around the world, you will see its many consumer products. Some of its more well-known brands in the US are McCormick, French’s, Grill Mates, Zatarain’s, and Lawry’s.

Adolph’s is a division of Lawry’s.

The McCormick website says, “We are a global leader in flavor. With our diverse and balanced flavor portfolio, we are ideally positioned to meet the increasing demand for flavor around the world.”

And under “Our History” they claim, “Through every milestone in McCormick’s history, there’s a common thread: we’ve kept pushing to raise the art, science, and passion of flavor to a higher level and improving the universal experience of eating, while always focusing on the importance of people.

Willoughby M. McCormick started the McCormick company in 1889 in his home. He hired three young assistants to help with production and sell their flavors and extracts door to door. The business grew.

When the Depression hit in 1930, business took a hit. Initially, McCormick reduced wages, but when his nephew, Charles P. McCormick (better known as C.P.), took over the company in 1932, he was able to turn things around. He did this by raising wages and cutting hours. He believed his employees had ideas worth listening to, so he formed a junior board of directors to provide new ideas.

C.P.’s management style worked well, and through all the company’s ups and downs, McCormick has always forged ahead and stayed true to its mission of creating the best flavors.

You can read more about McCormick’s history at McCormick and Company, Incorporated — Company History.

Why use Adolph’s Meat Tenderizer?

To make any meat more tender but especially tougher cuts, tenderizing is a good idea. Adolph’s Meat Tenderizer is just one way to do this. The enzyme, Bromelain, denatures (softens, weakens) the connective tissues in the meat, so it will be easier to cut and chew. Plus, using powder is easy and quick.

Do you wash off Adolph’s Meat Tenderizer before cooking?

Some recipes tell you to wash off the tenderizer before cooking, but this isn’t necessary if you use the right amount (1 teaspoon per pound). The active ingredient, Bromelain, is safe to consume in small amounts. In fact, Bromelain is known to aid in the digestion process. You can learn more about the safety of Bromelain in Bromelain and Papain Plant Enzymes Aid in the Digestion of Proteins.

How long do you leave the tenderizer on the meat? Is it okay to leave it on overnight?

Leave the powder on only a few minutes for a thinner cut of meat and up to 30 minutes for a thicker cut. I would not leave Adolph’s tenderizer on overnight. If you want to add some tenderizer to a dry rub or marinade for more even distribution and flavor, that’s okay, but even then, I would only leave it for the same amount of time as recommended.

What happens if I leave the tenderizer on too long?

The texture becomes unpleasantly soft and mushy. The same thing will happen if you use too much tenderizer. The directions for Adolph’s Unseasoned Tenderizer say to cook immediately. Except for thicker cuts of meat, let stand for 30 minutes before cooking. And use one teaspoon per pound.

How much Adolph’s tenderizer do I add to my meat?

Add approximately one teaspoon per pound of meat.

What are the ingredients in Adolph’s Unseasoned Tenderizer?

It’s important to note that the ingredients are listed by weight, not volume. In order, salt, sugar, corn starch (prevents caking), and Bromelain (tenderizer). The serving size is 1/4 teaspoon which is enough to cover 4 ounces of meat, a typical serving size. Since the salt is the heaviest, it is listed first. Sugar weighs the second most, then corn starch, and the lightest is Bromelain. I found this out through a comment from a McCormick representative to a questioning customer.

How do you use Adolph’s Unseasoned Tenderizer?

Is Adolph’s bad for you?

No, the active ingredient in Adolph’s Unseasoned Tenderizer is an enzyme called Bromelain. Bromelain is extracted from the stem or fruit of pineapple and would be similar to tenderizing your meat in pineapple juice (which does work, btw). Bromelain is safe to consume in small amounts and aids in digesting meat. Additionally, since Adolph’s is made of natural ingredients, it is not bad for you.

Is MSG bad for you?

Adolph’s Unseasoned Tenderizer boasts of having no MSG, but what is MSG, and is it really bad for you? MSG is monosodium glutamate and, when mixed with water, becomes glutamate. Glutamate is also known as umami flavor, the fifth basic taste alongside sweet, sour, bitter, and salty. Umami is essentially the taste of MSG.

It’s one of the reasons that steak tastes so good. You can read about it in Why Does Steak Taste So Good?

So why do people think it is bad for you? Back in 1968, reports of adverse reactions to Chinese food began circulating. And Chinese cooking was known for using MSG in their foods to enhance flavor.

Over the years, scientists conducted studies and concluded that MSG was the culprit for why people experienced headaches and other side effects after eating Chinese food.

But through continued research, what became known as Chinese Restaurant Syndrome due to MSG was debunked. You can read more about this in a 2009 review, Monosodium glutamate ‘allergy’: menace or myth?

So, if you still aren’t convinced that MSG isn’t bad for you, the good news is, Adolph’s Unseasoned Tenderizer doesn’t have any.

What other uses does Adolph’s Unseasoned Tenderizer have?

Here are 5 other uses:

Meat Tenderizer is the Kitchen Cure You Need to Know

I would say about 25% of the reviews were unrelated to meat tenderizing, but rather for other uses, particularly bug bites and keeping your dog from eating its poop. About half who bought it for their dogs said it didn’t work.

Maybe 10% were dissatisfied with the product because it was too salty, or the active ingredient had changed from Papain to Bromelain and stating that Papain worked better. A few complained about the no return policy.

It looks like there was a shortage of this product in stores for a while, so many customers were thrilled to find it on Amazon or other places online.

Several people commented on the size, most saying it was great, but a few didn’t need that much and bought it because it was the only size they could find.

Finally, I’d guess around 50% of customers commented on Adolph’s being the only tenderizer they use. Either they were introduced to this tenderizer by their mom or a friend, or they had tried others when Adolph’s couldn’t be located and found them lacking.

Overall, Adolph’s had high reviews, and people were generally satisfied with the product, whether they used it for tenderizing or not.

As a person who likes quick and easy, using a powder to tenderize my meat appeals to me. I can sprinkle it on a few minutes before cooking because I use it on thin, tougher steaks. I haven’t tried it on a thicker steak.

When I bought this product, I only had one purpose in mind; I wanted a quick way to tenderize my thin steaks for making stirfries. I wasn’t even thinking about other meats.

At the same time, I bought a meat hammer, as I like to call it, for further weakening of the muscle fibers. Using both tenderizing methods together gives my tough steak a much better chance of being tender.

I like that this tenderizer also has other uses because 44.5 ounces is a lot of meat tenderizer. We occasionally get bee stings at our house, and I’d like to see if it works better than baking soda.

Oh, it also is supposed to work on poison ivy. Because I typically get poison ivy a couple of times each year doing yard work, I’m using it if it relieves the itch.

Plus, it’s a stain remover. Who knew?

But, putting other uses aside, I can say that I recommend Adolph’s Unseasoned Tenderizer for tenderizing, at least, thin, tougher steak cuts like Skirt and Sirloin Tip.

So, that is my Adolph’s Unseasoned Tenderizer Review.

If you are looking for a meat tenderizer in powder form that is quick and easy, Adolph’s is a great choice.

It is natural and safe. And it softens and breaks down the connective tissue that causes your meat to be tough.

If you are concerned with MSG, it has none, and the active ingredient, Bromelain, not only comes from pineapple, it may help with digestion.

Adolph’s is easy to use and combines well with other tenderizing methods such as marinade, rubs, and tenderizing tools.

However, as I stated in the cons, I find the label a bit misleading. Some people think when it says it’s unseasoned, it has no salt. And when they see that the first ingredient is salt, they feel deceived.

And after I learned the ingredients are listed in order of volume, not weight, I wondered how people were supposed to know that.

We are taught to look at labels, so I think they should be clear. No one wants to be misled.

That being said, I still do recommend Adolph’s Unseasoned Tenderizer unless you are very concerned with your sodium intake.

2 thoughts on “Adolph’s Unseasoned Tenderizer Review – Does It Work?”