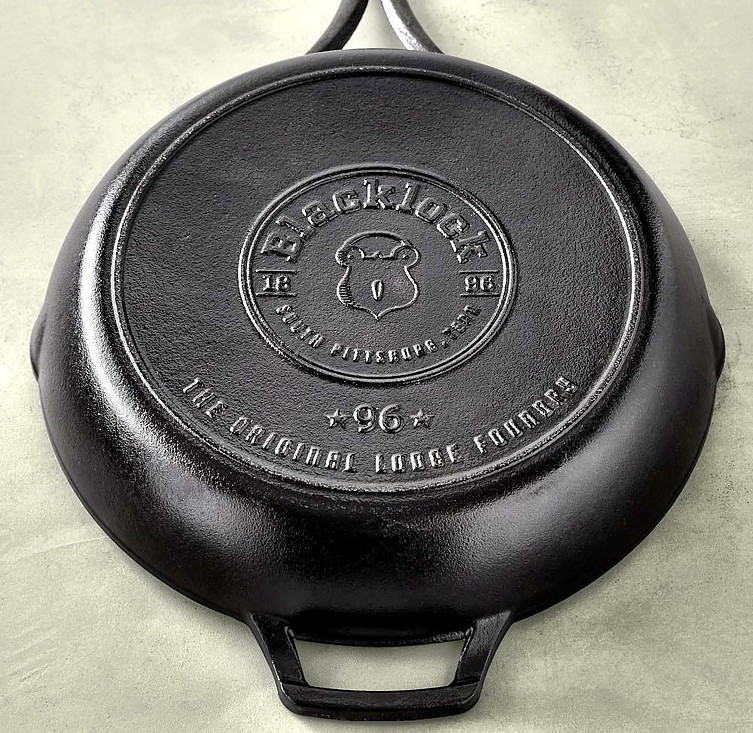 Maybe you already own Lodge cast iron, but you have one of their classic pans.

Or perhaps you are new to cast iron and looking for the best skillet to get started.

Both the classic and Blacklock are great skillets, but Blacklock is a step up.

Therefore, depending on what you are looking for, you might find that Blacklock is what you want.

Hopefully, this review will help you make an informed decision.

Blacklock is a cast iron cookware collection named after the original Lodge Cast Iron foundry. This cookware combines heritage with a new design. It offers:

Additionally, each piece of cookware is numbered to correspond to a significant date in Lodge history.

#10 – 14.5-inch skillet: Blacklock Foundry burns to the ground in 1910. But later that same year, Joseph rebuilds and changes its name to Lodge Cast Iron.

#39 – 12-inch skillet: Lodge survives the Great Depression by adapting to the times. They make door stops and fireplace irons in the shapes of animals when they notice cookware isn’t selling well. And people buy them.

#49 – 4-quart deep skillet with lid: By 1949, the third generation takes over the business. They increase growth through automating and updating the foundry.

#02 – 5.5 quart dutch oven: In 2002, Lodge introduces pre-seasoned cast iron. They realize people no longer want to go to the work of seasoning their cookware before using it for the first time. So, Lodge solves this problem by being the first manufacturer to offer pre-seasoning.

It began in 1896 with Joseph Lodge and was called Blacklock Foundry.

However, after the building burned down in 1910, Joseph rebuilt and renamed the company, Lodge Cast Iron.

Over the years, Lodge has survived several economic downturns and even thrived when other foundries were closing down.

And as business continued to grow, another foundry was built. The new foundry enabled Lodge to increase its manufacturing production by seventy-five percent.

And as far as cast iron goes, Lodge offers a large variety, including classic, enamel, chef, and Blacklock.

Plus their carbon steel cookware and many accessories.

Is there a lid that goes with this skillet?

Can nonstick spray be used for cooking in place of oil or butter?

Lodge sells a seasoning spray, but they recommend a multi-purpose oil such as olive, vegetable, sunflower, or grapeseed for cooking. Adding oil ensures the food won’t stick and builds layers of natural seasoning in your pan. Plus, I’ve read that nonstick spray removes the seasoning rather than adding to it.

Is it safe to use this skillet on my glass-top stove?

Yes, it is safe, but I would be careful about sliding it because it can scratch the surface. However, according to Lodge, this skillet is safe for all stovetops.

Can I let my pan soak if there is food stuck in it?

No, don’t let cast iron soak. For stuck-on food, Lodge recommends simmering a little water in the pan for 3-5 minutes to soften the food, then using a plastic scraper to remove it. After that, rinse and dry the skillet or use a little soap if desired or needed.

What is the black or brown residue on my towel when I dry it?

The residue is normal. It’s just a bit of seasoning coming off, and it is nothing to worry about.

Does Lodge use a soy-based oil to season their cookware?

Yes, Lodge uses a highly-refined soy-based vegetable oil to season all of their pans at the foundry. The oil is kosher and contains no animal fat, peanut oil, or paints. Plus, any proteins that cause soy-related allergies have been removed.

Is this pan flat, and can it work on an induction cooktop?

The Blacklock skillet is flat and works on every type of stovetop, including induction.

What can I cook in this size pan?

Lodge says this size is great for a dinner for two. You can make skillet meals, two small steaks, pork chops, or chicken. The 10.25-inch is also good for side dishes such as vegetables and potatoes. Or even a pizza.

The reviews were mixed. The majority were happy with their skillet, but a few were disappointed. Since Blacklock costs more, people may have had higher expectations. Everyone agreed that the skillet was lighter, though.

And the ones who were dissatisfied said things such as:

I do not own a Blacklock skillet, so my thoughts are based on research alone.

However, I hope to get one someday.

And as strange as it might sound, I most like the idea of having a skillet that is connected to Lodge’s history.

Because Lodge has been my go-to cast iron from the beginning.

The weight of the classic skillets hasn’t bothered me, but it would be nice to have a lighter one. And I’m sure I would use it more.

But I’m a bit skeptical about the handle because I like the short, flat ones. Although I have nothing to compare it to yet.

And as for the triple seasoning, I’m ambivalent. I don’t think I would pay a higher price to have a couple extra layers of seasoning on the pan. Then again, I might find the pan easier to cook with and clean.

Overall, I do like the pan. And I can recommend it if you are in the market for a lighter skillet and are willing to pay more.

What I like most is the connection to Lodge history and that the pan weighs less.

If you like cast iron and are thinking about upgrading to something a little nicer, Blacklock is a great next step.

It’s not as pricey as the high-end manufacturers, yet Blacklock has some of the features that make it an excellent choice.

Features such as triple seasoning for a more nonstick surface and a lightweight design. Or the handle which has been extended and stays cool longer than the short flat handles on the classic pans.

Another interesting feature is that each piece is connected to a date in Lodge history.

For those looking for something a little better, I recommend the Lodge Blacklock Collection, and specifically the 10.25-inch skillet.