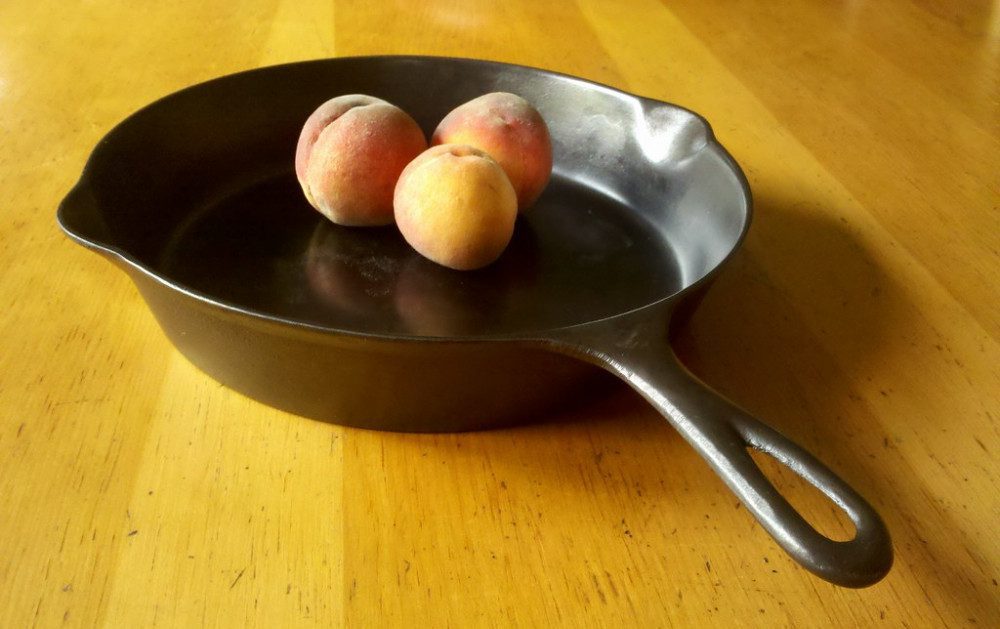 Do you have a bumpy skillet and wonder, “Why would I want my cast iron to be smooth?”

I mean, they look nice, but are there any real advantages to having your skillet smooth over rough?

And is it worth it to sand it down and get one quickly, or can I wait and get it smooth over time through seasoning?

These are all excellent questions and ones we will look at.

Why Would I Want My Cast Iron Pan to Be Smooth?

Many cast iron enthusiasts will tell you smooth pans are better than rough, hands down, but others will say it doesn’t matter. Or even that bumpy is better. However, some reasons you would want your cast iron to be smooth are how it looks and feels. In addition, your pan will be more enjoyable to cook in, smooth cast iron connects you to the past, and last but not least, its nonstick properties. The final reason is the one most often debated.

They are indeed a thing of beauty.

If you have inherited one, as one of my friends has, you have a treasure.

When I saw my friend’s polished skillet, I was impressed with how smooth and shiny it was.

I don’t know if I will ever have one that looks as good as his, but I can still appreciate that smooth-looking skillets are nicer to look at than rough-looking ones.

And that’s one of the reasons people sand down the bumps and polish their skillet.

Another reason people want smooth cast iron is how slick and buttery it feels.

Compare that with the feel of a rough and bumpy cast iron pan, and you will agree that there is a difference.

So, while it’s true that the way the pan feels is important to some if it doesn’t perform, how it feels won’t matter.

And how it looks won’t matter either.

3. Smooth Cast Iron is More Enjoyable to Cook In

Looks and feel are not the most important reasons to have smooth cast iron.

As one person puts it, the benefit of having a smooth skillet is how nice it is to cook in. He compares scraping a metal spatula over a rough surface to nails on a chalkboard.

And yet, he recommends using a metal spatula as one of the best ways to turn a rough skillet into a smooth one.

Every time you cook in the pan, use a metal spatula, and eventually, you will wear the bumps down. But don’t forget that building up your seasoning also leads to having a smooth skillet.

Seasoning plus a metal spatula is like a two-step approach and will get you a smooth pan quicker than seasoning alone.

However, using a metal spatula on cast iron is somewhat controversial.

If you have the time or inclination, you can read through a bunch of people’s opinions at Why are you supposed to use a metal spatula on cast iron?

Or you can read How Does a Metal Spatula Help Make My Cast Iron Smooth?

Or simply watch the video below.

What Really Happens When Using a Metal Spatula on Cast Iron

4. Smooth Pans Connect You to the Past

One person seems to think nostalgia is to blame for why people prefer smooth pans over rough.

After all, that’s the way manufacturers used to make cast iron cookware.

Pans came out of the mold bumpy just like they do today, but foundries included an extra step to polish the surface, so it was smooth.

Today, a few companies still polish as part of their production, but you will also pay more money for one of their pans.

You will get a good pan for the more affordable options, but it will most likely have a rough surface.

On the other hand, if you have inherited any cast iron passed down through the generations, chances are the pan is smooth.

Maybe you have heard family stories that bring fond memories, or you learned how to cook in cast iron from your grandmother.

It’s unlikely, in my opinion, that feeling connected to the past is the only reason for wanting smooth cast iron, but it could be significant.

But let’s move on to the last reason and the most controversial one.

Smooth vs. rough for being the most nonstick is where the debate begins.

Fans of smooth cast iron boast of its nonstick properties, but fans of rough cast iron insist the texture makes it easier to season, and will eventually make it smooth.

And both are right.

While it is true that smooth, slick iron is nonstick, so is well-seasoned rough cast iron.

So to claim that one is better than the other for its nonstick properties is a bit of a misnomer.

All cast iron, whether smooth or rough, will need to be seasoned because the seasoning is what protects the iron from rust.

The truth is, as far as I can tell, both rough and smooth cast iron can be equally nonstick.

What I Have for Cast Iron

I own one smooth skillet, but not the polished kind of smooth. It was inexpensive, and my food absolutely stuck to the pan when I first cooked with it. I love this pan, though, and wrote about it in A Cast Iron Skillet Review.

Most of my cast iron is Lodge, and that means bumpy. I wrote about rough cast iron in Why is My Cast Iron Skillet Bumpy?

Although I don’t mind bumpy cast iron, I do want to build up the seasoning over time, so it is smooth.

I have no interest in sanding down one of my skillets to get a smooth, polished look at this point.

In other words, I want my pan to be smooth someday.

But you may want a smooth one now.

If you are interested in sanding but don’t know how to do it, many videos can show you how, including the one below.

If you were asking, “Why would I want my cast iron to be smooth?” hopefully, you now have a better understanding of why.

While the way a cast iron skillet looks and feels is a plus and two reasons people give for why they want smooth cast iron, a more important reason is how enjoyable it is to cook in.

Another reason is smooth cast iron connects people to the past. Either because it’s the way it used to be made or it brings back cherished memories of loved ones.

Many people have the privilege of using smooth cast iron because it was passed down to them.

And while the most popular reason is that smooth makes your pan more nonstick, that is debated and more a matter of opinion and preference.

So, what is your opinion?