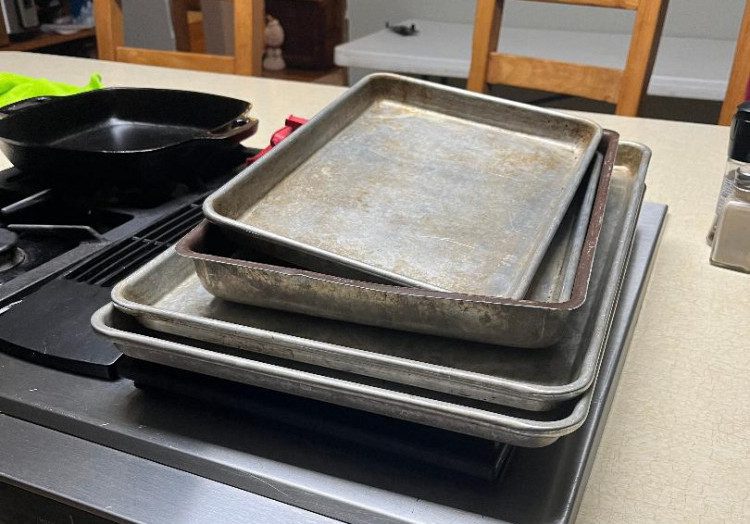 Ever wondered, “Why are there no cast iron baking sheets?”

You know that cast iron is beneficial, so why not make a baking sheet for your favorite foods you make in the oven?

Surely cast iron would do a better job than what you currently use.

But, what if there are baking sheets made of cast iron?

Why Are There No Cast Iron Baking Sheets?

Cast iron is not a material one thinks of when it comes to baking sheets (also known as jelly roll pans or cookie sheets). But contrary to popular opinion, they do exist. However, they are not common. And most people still use aluminum or steel. Cast iron is heavy and brittle. Its ability to retain heat works against it when cooking in batches; when frequently moving the pan in and out of the oven. Or when you need it to cool down a bit before adding more food. Perhaps it’s not as big of a problem as it first sounds, though. Maybe other uses make cast iron the ideal baking sheet.

Myth: Cast Iron is Not a Good Material For a Baking Sheet Pan

For people who don’t own a cast iron baking sheet, they can name all the reasons why it’s not practical.

Here are some of their reasons:

People Who Own a Cast Iron Baking Sheet

If you ask people who own a cast iron baking sheet, will they say the criticisms aren’t true.

Are they concerned with its heat retention or the fact that it’s brittle? Does its weight or cost cause them to regret buying one?

I didn’t read one negative comment from the Amazon reviews for the Lodge baking pan. The reviews were positive other than a couple of people who mentioned its heaviness (I didn’t read them all, though).

Neither did anyone have a bad thing to say on the forum asking if anyone had a Lodge baking pan.

They talked about all the things they made with their pan in both places.

People talked about using it on the stovetop or on the grill. Lodge says it’s not intended for the stovetop, but is only suitable for baking and using in the oven. Possibly because the baking sheet is cast thinner.

I never imagined I would want a cast iron baking sheet because I didn’t think the benefits would outweigh the negatives.

However, I had not done any research until now.

I still wouldn’t get rid of my aluminum baking pans because they are good quality, and I have no problems with them.

Plus, there are some things I would still want them for, such as when making cookies.

Though I would probably do a comparison, some on each pan.

This leads me to say, I now think I would like to have one. I can see more advantages than I previously realized after reading the various ways people use their pan.

Some things I make in a heavier skillet in the oven could be made in this pan instead.

But some of the criticisms are valid. Therefore, I think everyone needs to decide for themselves.

Having a cast iron baking pan is not for everyone. Here are some things you might want to consider before making a decision:

However, you may have to replace your aluminum if it warps unless you have quality ones. On the other hand, quality ones may still cost less than a Lodge cast iron baking sheet.

Cast iron is heavier than aluminum or other materials, meaning you won’t be able to remove the pan with one hand.

It’s nice that the cast iron comes with two helper handles because you will need them both.

The weight might not matter to you, though. Especially if you like the benefits of cast iron cooking.

What You Will Use It For

Is your plan to replace or add to your other baking sheets?

If it’s to replace, are you comfortable making cookies on it? Will one be enough, or will you need more?

There is less concern if you intend to keep your current baking pans. Certainly, you have at least one thing in mind to cook on it.

How Many Will You Need?

One baking sheet is generally not enough for cookies since you make them in batches. Even a pizza may need two if you’re feeding a family.

But if it’s to make bacon or a Texas Sheet cake, then one may be all you need.

Are you convinced cast iron won’t affect the baking times for recipes that assume you are using a different material? A material that doesn’t retain its heat so well?

If not, are you comfortable making your own adjustments and figuring out what works?

On the other hand, many foods benefit from cast iron’s heat retention, like pizza or skillet potatoes.

If you are wondering, “Why are there no cast iron baking sheets?” now you know that they do have them.

I don’t know if they will make it into the top 10 just yet, but there are some real benefits to having one.

Additionally, people with a cast iron baking sheet have wonderful things to say about it.

The way it cooks and the extra flavor it gives the food are two primary reasons this pan is better.

And the fact that it’s brittle, heavy, has higher heat retention, and costs a little more doesn’t outweigh the benefits.

Of course, you have to like cooking with cast iron, or the negatives may seem huge.

A good middle ground might be to have both. Don’t get rid of your other sheet pans until you know for sure. Or you find that you always and only use your cast iron baking sheet.

If you would like to know more about the Lodge cast iron baking pan, check out my review.