I am a participant in the Amazon Services LLC Associates Program. If you make a purchase using the links from my articles, I receive a small commission.

Regardless of whether you just got your first cast iron skillet or you inherited an old one, seasoning your cast iron skillet is an important first step. Cast iron can easily last a lifetime if you care for it properly, and seasoning is the first thing you need to do.

Cast iron is known for its ability to heat food more evenly and retain its heat longer than other types of pans. This translates into food that is cooked more evenly and why it tastes better in my opinion. Cast iron is also used by many professional cooks. They consider cast iron to be one of their favorite choices in the kitchen.

When I received my first cast iron skillet as a Christmas gift, it didn’t come with instructions. I had no idea it needed to be seasoned. I used it to make bacon and eggs. The eggs stuck terribly in the pan and I knew something wasn’t right. So, I did some research on cast iron just like you are doing now. I found out the reason the eggs had stuck to my pan was that I hadn’t seasoned it.

In this post, I want to share with you everything I know about seasoning a cast iron skillet and why it’s important.

What does it mean to “season” cast iron?

Seasoning your cast iron skillet is the process of getting your skillet ready to use. It involves putting a thin layer of oil on the entire pan, including handles, and baking it. The idea is to create a barrier between the iron and the air.

Cooking is also a form of seasoning. Because it is recommended that you put a thin layer of oil on your pan in between uses, the oil continues to get into the pores of the metal when you cook and helps keep that protective layer built up. So the more often you use your skillet, the less likely it will need to be re-seasoned.

Seasoning your pan is very important. Baking the oil into your skillet allows the oil to get into the pores of the metal and create that barrier I mentioned. Seasoning makes the iron nonstick and keeps the skillet from rusting.

Moisture damages cast iron when it is wet for too long. You should never submerge your pan into water or leave it soaking in the sink. That also means no dishwasher. Of course, a little soap and water are okay for cleaning, but you will want to dry it thoroughly before putting it away!

Not everyone will say using soap is okay. But more often you will now hear a little soap won’t hurt. Too much soap or water though will ruin the seasoning and cause your pan to rust, and you don’t want that!

If, like me, you already used your skillet without seasoning it first, don’t worry about it! It’s not that big of a deal. Just make sure your pan is clean and dry and season it before using it again. 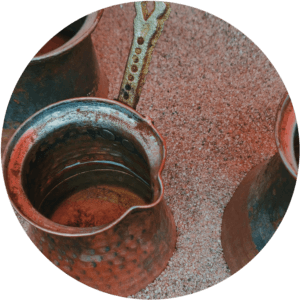 Now that you know all about seasoning your cast iron skillet, it’s time to learn how. You will need baking oil, a cloth or paper towel, foil or a sheet pan for catching excess oil drips, and of course your pan.

Vegetable oil is often used, but some other oils you might consider are safflower or canola. Really, any baking oil will do the job, but you might want to stay away from olive oil as your first choice since it is more likely to smoke in the baking process.

Lodge Cast Iron recommends using Canola baking spray, and I have to tell you, since I’ve started doing that, I find the seasoning in between uses so much better. And I seasoned it in the oven this way, and canola baking spray works great. Here is how:

Now It’s Time to Get Cooking

Once you’ve got your skillet seasoned, it’s time to start cooking. Remember, the more often you use your skillet, the longer it will be before it needs to be re-seasoned. I use mine every day, sometimes more than once. 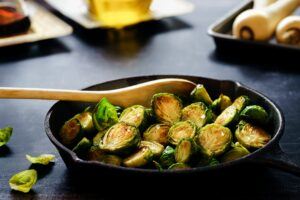 Even if one was passed down to you and it needs a lot of TLC, it will be worth it to clean it up and season it for use. In fact, older cast iron skillets are often preferable to newer made ones. You can count on them being well made and they have had years of use, making them better.

Something I keep hearing is that cast iron gets better with time. The more you use it, the better it gets. Cast iron is durable, healthy, and well worth the little bit of extra work it takes to maintain. Not to mention, the food will taste delicious!

So, season your cast iron skillet now, and get cooking!