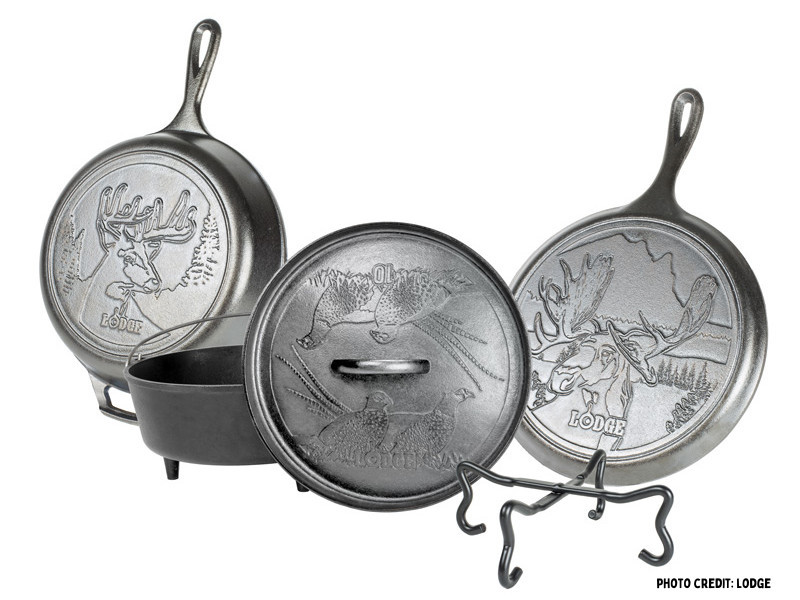 Welcome to my Lodge 4-in-1 Camp Dutch Oven Tool Review.

If you like cooking in a Dutch oven outdoors while camping or even in your backyard, you realize having a few accessories is helpful.

The Lodge 4-in-1 camp dutch oven tool is one of the more helpful things to have.

Well, for starters, it has four uses.

So. let’s look at this helpful tool and the four ways you can use it.

What is a 4-in-1 Dutch Oven Camping Tool?

It can be a bit tricky to cook in a Dutch oven outdoors if you don’t have the necessary accessories. One accessory with four uses is the 4-in-1 Camp Dutch Oven Tool. First, it can be a small cook stand for raising any piece of cookware off the coals when cooking. Or it can be a stand to put a lid on while stirring the food. Two other ways to use this tool are as a hook to lift a hot lid from the Dutch oven or Cook-It-All or to lift the Dutch oven itself by the baling wire handle.

Joseph Lodge founded this company in 1896 and originally called it Blacklock Foundry.

However, after the building burned down in 1910, Joseph rebuilt and renamed the company Lodge Cast Iron.

Over the years, Lodge survived several economic downturns and even thrived when other foundries were closing down.

And as business continued to grow, they built another foundry. The new foundry enabled Lodge to increase its manufacturing production by seventy-five percent.

They offer a large variety of cast iron, including classic, enamel, chef, and Blacklock.

They also have many accessories and a line of cast iron grilling cookware.

Is this only for a Dutch oven?

No, you can use it for other things too. For example, you might want to use it as a trivet or cooling rack for any cast iron piece you use in outdoor cooking. Or as a stand to raise any cookware off the ground. People also use it with the Cook-It-All.

How does the 4-in-1 tool work when using your Dutch oven lid as a skillet?

What other accessories are helpful with Dutch oven cooking?

If you have a Dutch oven or Cook-It-All and a 4-in-1 tool, you might still want leather gloves, a charcoal chimney, and tongs for moving the hot coals around. Some prefer a separate lid lifter or a bigger cook stand. At the very least, I recommend a pair of heavy-duty gloves that can withstand intense heat.

How can it be both a lifter and a stand when cooking?

Although this tool has four uses, you will have to choose how you will use it. It can’t be both a lifter and a stand simultaneously. Neither can you cook on it, and at the same time set your lid on it. Some people have more than one or buy other accessories to go with it.

What is the most common way people use this tool?

It’s a toss-up between a cooking stand and a lid stand. When you cook outdoors with a Dutch oven, generally, you have hot coals sitting on the top. And when it’s time to check the food, you need to remove the lid and set it somewhere. Most people won’t want to put it on the ground or try to hold it, so they get the 4-in-1 tool to have a place to set it. But many people also use it for cooking and either find something else to hold their lid or buy a second 4-in-1 tool.

What’s the advantage of using it as a cook stand?

Usually, you put your Dutch oven over coals for cooking. Lifting slightly above the coals give you airflow and less burning on the bottom. In other words, your food cooks more evenly.

Why do you need a lid lifter if you are wearing gloves?

The further you can keep your hands away from the coals, the safer it will be, even if you’re wearing gloves. The same is true if you use it to lift the whole oven.

Do you need it as a cook stand if you have the Deep Camp Dutch oven with legs?

No, probably not. You will see the Deep Camp Dutch oven set right in the coals if you watch the video. However, the 4-in-1 tool will still come in handy if you use the lid as a griddle/skillet.

How to Use a 4-in-1 Camp Dutch Oven Tool

This little 4-in-1 tool is very well received. Although many people preferred one or two ways of using it, almost all were happy that they had one. They were pleased because it:

Very few people had anything negative to say about the 4-in-1 tool. And the most common disappointment was that it isn’t made in the US like Lodge cookware is. However, a couple of people were also unhappy that it:

First, let me point out that I don’t own a 4-in-1 Camp Dutch oven tool. So, what I think is based entirely on my research and reading what others say.

Second, this tool is primarily for outdoor cooking over coals and with a Dutch oven or Cook-It-All. Indeed, you can also use it with a cast iron skillet, wok, or round griddle (usually a Dutch oven lid).

I don’t do much outdoor cooking and none with cast iron cookware, so I don’t need one. However, it doesn’t mean I don’t think it’s a valuable tool for someone who does cook with cast iron outdoors.

I particularly like that it’s compact and has several uses. But I’d probably want two. Or maybe three. I didn’t read about anyone with three, but several people talked about using it all four ways. And I think to do that, you would need three.

One so you can put your Dutch oven over the coals, and another to lift the lid. A third would be to put the lid on while stirring the food.

Therefore, I recommend the 4-in-1 Camp Dutch Oven Tool for those who like outdoor cooking with cast iron.

Thank you for reading my 4-in-1 Camp Dutch Oven Tool Review.

If you cook outdoors with cast iron, this tool will be helpful in one of four ways:

As you can see, it is versatile. It’s also sturdy and compact.

However, you will need more than one or a different tool to do all the things this 4-in-1 can do. For example, if you’re using it as a cook stand, it can’t also be a lid stand and a lid lifter.

So, it’s best to know what you will use it for and if you’ll need more than one.

What I can say for sure is I highly recommend getting at least one if you cook with cast iron outdoors.