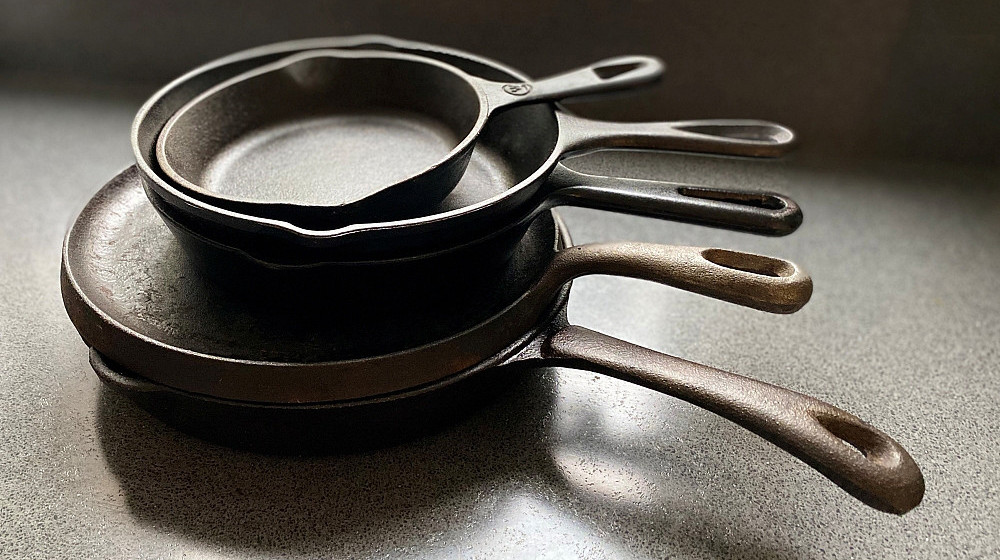 Join the club if you’re wondering how regular cast iron and light cast iron are different.

It may be evident that light cast iron weighs less, but how else do they compare?

Cast iron is known for its ability to retain heat and last forever. It’s great for searing steaks and baking cornbread.

So, can light cast iron do these things as well?

How Do Regular and Light Cast Iron Differ?

Regular cast iron is durable, retains heat, and gets better with use. It is also heavy. Light cast iron is lighter in weight and can do all the same things as regular cast iron, but some say not as well. It heats up and cools down quickly and is more challenging to cook the food evenly. However, it really depends on the quality of the pan. If weighing less is the most important factor, then you might enjoy light cast iron more.

Light cast iron’s number one advantage is its weight. Some people think that it is its only advantage.

However, there are two types of light cast iron. The first type is more affordable and doesn’t perform as well as regular cast iron. And the second type is more durable and functions as well as standard. So, let’s look a little closer at each.

Type one is more of a cross between cast iron and carbon steel. Carbon steel is thinner and lighter than cast iron and is made so its walls are thinner. These manufacturers focus more on the lightness of their skillets rather than the craftsmanship. And they often sell other products unrelated to cast iron. Some examples are the ExcelSteel, Starfrit, and Guy Fieri brands.

The second type is more like vintage cast iron, which was cast thinner and machined. Today, some companies choose to cast their skillets the same as they did in the past. A few manufacturers like this are Ronneby Bruk, Marquette, and Field Company. These companies tend to go into more detail about how they design their skillets.

Lodge also has their Blacklock series, which is thinner and more lightweight. And is closer to the second type.

So, how much do they weigh?

Here are the weights of several 10 to 10.5-inch skillets (and one 11-inch) from lightest to heaviest:

As you can see, there is more than a four-pound difference between the lightest and heaviest. That is pretty significant.

This list is by no means exhaustive, but it gives you a good idea of the ranges in weight.

Because regular cast iron has thicker walls, it retains heat better. Thinner, lightweight skillets get hot and cool down more quickly, which means they don’t hold onto their heat for as long.

Heat retention is one of the advantages of cast iron. It means when you add your food to the hot pan, it won’t cool down. This is especially good when searing a steak or for other high-heat cooking.

It also means your food will brown better and form a nice crust on the bottom. Plus, when you heat cast iron slowly and give the pan enough time to get hot everywhere, it will cook your food evenly. Apparently, this isn’t the case with all light cast iron.

Since regular cast iron is heavier and thicker, it is more sturdy and tough.

Cast iron is brittle, and the lighter it is, the more susceptible it is to cracking or warping.

It’s tough to ruin cast iron, but it’s not indestructible. You do have to take care of it. And if you do, it gets better the more you use it.

Both light and regular cast iron can last and be passed down. However, since regular is less likely to warp or crack, it is a little less of a worry.

In the video below, you can see Americas Test Kitchen’s review of light cast iron (and other cookware). If you only want to see the light cast iron, it starts at 3:10.

Hopefully, you have a better understanding of what makes light cast iron different from regular cast iron.

The first and most obvious is the weight.

A lighter cast iron skillet is an advantage. However, it can also be a disadvantage.

Because it heats up quicker, you might get hot spots and unevenly cooked food. You often see this with bacon. The middle cooks before the edges because the pan is hotter in the center.

Although this can be true of regular cast iron, too, it’s less likely when you heat it slowly and give the pan time to get hot everywhere.

I don’t own any light cast iron, but from reading different people’s opinions, I don’t think it’s worth exchanging weight for quality. If you don’t mind paying a higher price, then you can have the best of both worlds.

On the other hand, if you don’t like that cast iron is heavy, you basically have two choices:

One of the lighter skillets (and more premier) is Lodge Blacklock. They do cost more, but not as much as some of the higher-end brands. They may be the best solution.

To learn more about Lodge Blacklock, see my review on the 10.25-inch skillet.