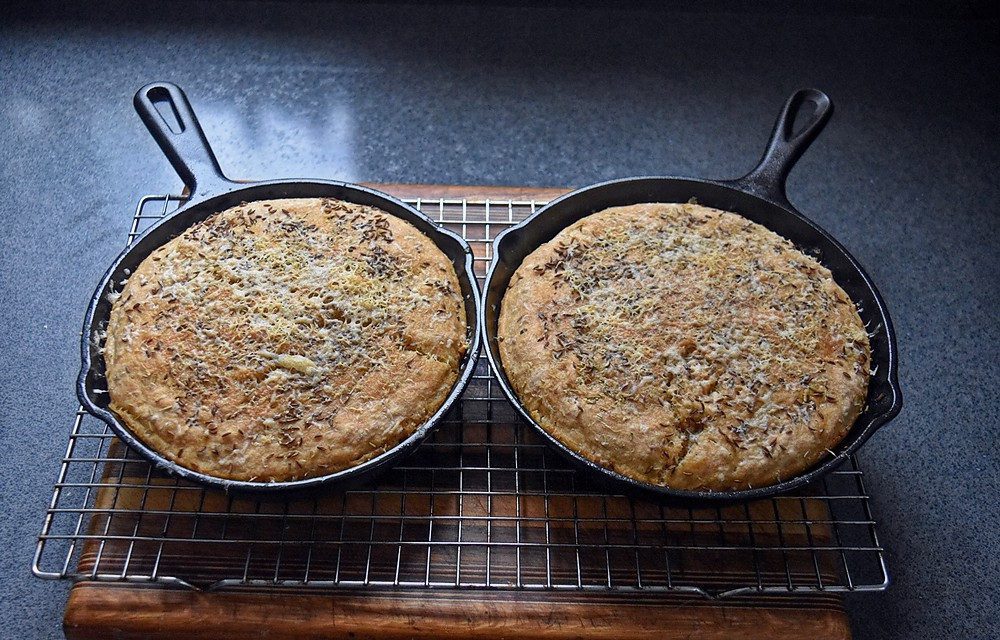 Are you wondering, “How do I keep bread from sticking to my cast iron?”

Is it your first time baking bread? Or is it an ongoing problem, and you’re tired of it happening?

It would be frustrating to make bread and have it stick to the bottom of the skillet. Plus, it makes clean-up harder.

I don’t know firsthand because I just made bread for the first time. And it didn’t stick.

But I know it’s a real thing because people share their stories and ask what to do.

How Do I Keep Bread From Sticking to My Cast Iron?

If you want to keep your bread from sticking, try using parchment paper. Creating a barrier between the bread dough and the cast iron will prevent it from sticking to the pan. There are other things you can try too. For example, oiling and preheating the pan or letting the bread cool for 15 minutes after baking all help reduce sticking. Another way to create a barrier is by adding a dusting of cornmeal or flour to the oiled pan. Try combining several of these tips for the best results.

Why Bread Sticks to Cast Iron

Bread sticks to cast iron because chemical bonds form between the dough and the iron while baking.

Knowing the best way to release the chemical bonds or keep them from forming in the first place is part of baking bread.

Let’s look at 5 tips that can keep bread from sticking or reduce its chances.

Parchment paper creates a barrier between the dough and the iron and will keep any chemical bonds from forming.

However, parchment paper can keep the crust from getting crispy. So, one thing you can do is crumple the paper to make it flexible and run it under cool water to add a little steam to the oven.

Not everyone wants to use parchment paper, so these other four tips may help.

Oiling the Pan will naturally help reduce the chances of bread sticking. Simply pour a little oil into the bottom of the pan before adding the dough.

You can also add oil to your hands to help transfer the sticky dough to the pan.

Preheating the Pan in the oven and letting them heat together is another way of reducing sticking.

Letting the Bread Cool for 15 minutes if it seems to be sticking will sometimes give the bread time to release on its own.

Adding Flour or Cornmeal to the oil in the bottom of the pan before the dough goes in will create a barrier. It may not work as well as parchment paper, but combining this tip with some of the other tips will definitely help.

The Recipe I Used From Sweet Paul’s Magazine

For my first experience making bread, I wanted a simple recipe.

I looked at a few before I found Sweet Paul’s, and they didn’t seem simple at all.

But this recipe was indeed easy.

I didn’t have any fresh thyme, so I decided to use thyme seasoning and mix it in the bread and put a little on top with the sea salt and olive oil (However, I forgot the olive oil altogether and didn’t put the thyme and sea salt on until after it was made).

I made it in two 6-inch skillets and one 7-inch because I wanted three loaves.

Unfortunately, the loaves didn’t rise as much as I thought they would, and my dough wasn’t sticky, but it still tasted delicious.

It was a little dense, so I’m hoping it will be even better next time.

I also thought the dough would spread to the edges as it baked, but as you can see in the picture, that’s not what happened.

So, as you can probably guess, I can make quite a few improvements in the future.

It took us three days to eat them, and by the third day, the bread wasn’t as fresh. So I will probably try freezing at least one or two of them next time.

One last thing: I’m guessing the bread didn’t stick because I added oil to the bottom of the skillet before putting the dough in the oven to bake.

Baking my first loaf of bread was exciting and something I’ve wanted to try for a while now.

I had no idea if it would stick.

And when it didn’t, I knew I had found a recipe I would make again.

But some of you like the bread you make but not that it sticks. You don’t want to change your recipe.

So, if you are asking, “How do I keep bread from sticking to my cast iron?” I recommend trying any of the 5 tips (or the recipe).

Parchment paper will do the trick by creating a barrier between the dough and the iron.

Without parchment paper, you will need to put oil in the bottom of the pan before adding the dough.

And combining the oil with a dusting of flour or cornmeal will create a stronger barrier than oil alone.

Preheating the pan can also help as well as letting the bread cool for 15 minutes to give it time to release on its own.

Do you have a favorite bread recipe?

And do you use any of the five tips already?

Let me know in the comments below or share any thoughts you have on how to keep bread from sticking to cast iron.